Put on your Easter Bonnet and head to The Little Burlesque House by the Sea!

Happy Easter to all who celebrate! What better way to enjoy the holiday than savour some chocolate and read my "Easter Egg" release from Shadowfire Press? The Little Burlesque House by the Sea is a lesbian/MFF post-war historical, complete with Amish sex! What more could you ask? Maybe you'd like to know how girls end up working in a house of ill-repute. Maybe you like to see families grow and reunite. Well, we've got that too! And a whole lot of burlesque to boot! 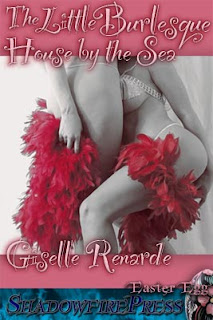 Sapphic secrets abound at the little burlesque house by the sea!

Madame Mireille's ocean-side parlour, Les Trois Dames Jouissantes, is one of the last houses holding to the tenets of classic burlesque. They specialize in raunchy comedy
sketches, undulating fan dances, chorus lines and, of course, the striptease. In post-war Maritimes, Trois Dames enjoys notoriety thanks to an all-female cast combining the smart with the sensual.

It was this reputation that drew the troupe's two newest members to the little burlesque house by the sea. Ginger the saucy redhead is master of the Comedy Striptease.
New to the business, Wild Orchid embodies all that is innocent--or so
she'd have you believe! Secrets abound at Les Trois Dames Jouissantes,
and it takes more than slippery fingers to bring them to the surface.

Around the dormitory, where Leili kept mostly to herself, the girls all looked rather plain. In costumes and stage makeup, they were gorgeous. Every last one of them. A thrill ran up Leili’s spine. She hopped on the spot, tapping her fingernails together. Two nights from now, or perhaps even tomorrow, Orchid would make her debut appearance in that line.

The girls waved their feathers in the air in such a way that the girl in front always managed to conceal everybody else’s...what was the word, again? Blisters! Every so often, the lot of them would turn and you’d catch a glimpse of their ruffled panties in a shade of pink so subdued they looked almost grey. But the sequins, ah, the bright pink sequins down the front glittered like stars under the stage lights. With every roll of the girls’ hips and flick of the feathers, the girls’ scant clothing produced a veiled shimmer effect.

She and Ginger rehearsed in their own clothing. This was the first time Leili got to see the costumes. They were spectacular. And the girls! The way they moved their bodies...they had something Leili didn’t have. They had It.

“How do they move like that?” she whispered to the brassy woman at her side.

“How should I know?” Ginger glowered. “I’m the one who can’t get the moves down, remember?”

“I suppose.” Leili realized this woman was the closest thing she had to a friend at Trois Dames.

“I don’t know how to be that way,” Leili said, fixated on Sally’s dance but inching in front of Ginger. If this lady was anywhere near as aroused by the Veils act, and if she was anything like Madame, she wouldn’t be able to resist. Reaching up the wall, Leili turned the knob on the gas lamp above their heads until their little corner of the house was completely in the dark. She took a step back, posing herself against Ginger’s soft form. For a moment, she didn’t breathe.

Canada just got hotter!
http://www.freewebs.com/gisellerenarde
http://twitter.com/GiselleRenarde
Posted by Giselle Renarde at 11:27 AM