A New and Naked Anthology: Smooth 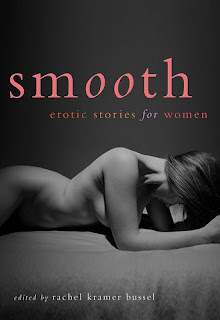 The caress of skin against skin, the warmth of another’s touch, relishing the sight that few others get to see — these are the reasons that disrobing before sex can be so gratifying. The stories in Smooth, collected by award-winning erotic editor Rachel Kramer Bussel, capture the heat of being stripped bare, of flaunting your body, and of reveling in pure sensuality. Read along as women get tattooed, become “the sushi girl” at a restaurant, strip on the subway, go commando, host tea parties, enjoy sploshing, and much more. Featuring stories by Donna George Storey, Heidi Champa, Angela Caperton, Charlotte Stein, Louisa Harte, Jacqueline Applebee, Susan St. Aubin and other leading erotica writers, these adventurous characters have more to reveal than just being naked.

Introduction: Naked Girls in All Their Glory

Posted by Giselle Renarde at 11:39 PM