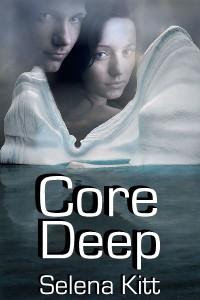 Blurb:Scientists Mary and Finn are left alone near the Christmas holiday to finish their research—pulling ice cores at the top of the earth. The isolation of the Arctic makes their already irresistible attraction to one another grow even greater, but a profound discovery in the ice serves to melt both their hearts. Note: This story originally appeared in the anthology Quickies.

"It's everything and nothing all at once." She reached out, opened his fist, and put the test tube in it. He looked down at their hands, and then back at her, his eyes searching. "It's an infinite source. What else, Finn? What else could it be?"

He opened his mouth to deny it, she knew him well enough to know, but she pressed her fingertips to his lips, shaking her head. "Don't think. Just feel. Hold it in your hand and feel it."

It was an incredibly unscientific request, but he swallowed and did as she asked. Shaking his head, looking pained, she knew he was struggling with the part of him that required facts, proof. He had them now in his very hand, and still his mind wanted to deny it. She searched his face as he opened his eyes and knew which part of him had won.

"It's everything. It's nothing." His voice actually trembled and she nodded, silently agreeing. "It's limitless power. For good or evil, that's what this means."

The idea was thrilling, beyond words, and she naively mused aloud for a moment. "In the right hands..."

Finn shook his head, his eyes flashing. "In the wrong ones..."

The endless possibility of that thought hung there between them. Mary closed her eyes with the weight of it, leaning her head back against the wall. She felt like crying, laughing, screaming. It was in her, everything at once, almost too much to bear.

"Are you okay?" His hand was warm on her forehead and she wanted to turn her face to it, encourage him to touch her, to bridge the gap. "Fever?"

This time it was her voice that trembled when she asked, "What are we going to do?"

Finn closed his eyes again, pursed his lips, that pained look briefly crossing his face for a moment before he looked at her and said, "The right thing."

Mary reached for the test tube, meaning to take it from him, set it aside, but he caught her hand, turning it over. She thought he was going to place the substance there, but instead he lifted her palm and kissed it, his breath hot against the sensitive inside of her wrist, his lips impossibly soft.

She stared at him in wonder, daring to ask, "So, just what is the right thing, Finn?"

"Right now?" His eyes searched hers, looking for an answer that had always been there. "Right now, it's this."

There was no resistance in her. She let him lean in and capture her mouth, press her back and then down onto the cot, welcoming the weight of him. She heard the faint "tink" of the test tube hitting the floor and then rolling as they came together on the small confines of her little bed, mouths slanting, tongues seeking heat.

Posted by Giselle Renarde at 10:57 PM