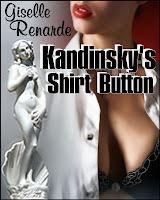 Giselle Renarde is pleased to announce the release of her much-anticipated fifth e-book, KANDINSKY'S SHIRT BUTTON.

To Arthur, Violette is the most beautiful woman in the world. She doesn't see it. An artist obsessed with the image of mythical Venus, her home is a shrine to the goddess of love. How can Violette possibly consider herself among the ranks of the beautiful when her body--her infuriatingly male body--betrays her? Violette is, she claims, “About as beautiful as Kandinsky’s shirt button.”

“Of course not-he died in the 40’s-but Kandinsky was around for the birth of abstract expressionism. He was interested in the spirit of art, in the spirituality of it.” When she took his cock in her firm grasp, Arthur nearly jumped out of his skin. Stroking it overtop his best pants, she went on to say, “Kandinsky believed that everything in our world has a secret soul which is silent more often than it speaks.”

Violette popped two cherry tomatoes in her mouth before unlatching his belt and sliding down the fly. Slipping her hand against his gasping flesh, she fondled the hair down there as his abdomen hopped with pleasure. “It’s a beautiful sentiment, but he was writing about a shirt button in a puddle.”

“Why?” he asked. Or maybe he said ‘what’ or ‘wow;’ he really wasn’t sure of anything. He wasn’t even sure this was really happening. Was this gorgeous woman really fondling his balls? Sculpting his cock like clay? Exposing him to the open air of one of the city’s classiest restaurants? If all this was real, it was money well spent.

“He saw this button in a puddle one day, just a run-of-the-mill white men’s shirt button. You know the type that are sort of pearlescent? One of those. In the sunlight after the rainfall, this little white button was sparkling like an oyster shell and Kandinsky couldn’t help but stop and stare. He was fixated on this gleaming little button in a puddle.”

Arthur released a low moan from the back of his throat, though he didn’t intend to. Violette wrapped her fist around his cock, pumping the shaft with expert conviction. With every push and pull motion, the muscles in her arms heaved with exertion.

“Anyway,” she continued, “that’s what inspired Kandinsky’s concept of the secret soul. He felt this little white shirt button was communing with him, somehow. It was as if this tiny, mundane thing was glowing with a secret beauty the world could only see if it was really willing to look.”

Crossing one arm over the other, Violette grabbed another triangle of flatbread from the table, but spilled most of the hummus down her front. In such a low-cut dress, her clothes were unscathed but a nice drizzle of dip trickled down her breast, which heaved the harder she pumped his cock. “Oops!” Violette gurgled. “Do you want to get that?

Well, that's the press release. This is me...just giving you that personal touch. Even if it had never crossed your mind to read a work of transgender fiction, I do hope you'll give this one a go. I hate to show favoritism, but of all the e-books I have on the market, KANDINSKY'S SHIRT BUTTON is the one I find most heart-wrenchingly romantic. It's a beautiful story about some very memorable characters. Hope you'll all hop on over to eXcessica and pick up a copy.
Bright Blessings,
gigi

Posted by Giselle Renarde at 10:59 PM