Hot Summer Ménage...check it out! 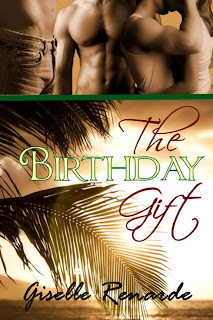 It's grey and miserable today where I live, but I have faith that showy summer sun will be back for more misadventure. Like in my book THE BIRTHDAY GIFT....you should read what the big 'ol voyeur got to watch in one small-town backyard:

Two ripped males getting friendly with each other, joined soon enough by the curvy Sheena and her new friend Meredith. And, let me tell you, the summer sun wasn't the only voyeur that day!

This most popular of all my e-books, THE BIRTHDAY GIFT "has something for everyone," as one reader told me. It's M/M, it's F/F, and it's MORE. This story it bi paradise, with delicious ménage content to please every reader!

Meredith is a cake-baking, apron-wearing small-town Canadian mom. Her guiding principle in life is, “What would June Cleaver do?” That is, until a curious set of circumstances cause her to crash an outdoor gathering where she stumbles upon a pair of delicious hunks getting a little hands-on with each other. Surely June Cleaver would have headed for the hills at the sight! Not Meredith. This relaxed get-together really heats up when one man’s wife appears on the scene… and encourages Meredith to join in.

Whew! Hot stuff! But the story’s not over yet. There’s still the tropical vacation, the confinement in foreign prison, the trial for freedom… and, hey, where’s Meredith’s husband in all this? It is his birthday, after all…

ADULT EXCERPT from THE BIRTHDAY GIFT
(If you're under 18 or don't like the idea of two muscular males getting it on,
avert your eyes now)

As Meredith drew her lids open, her heart nearly stopped.

On a built-in bench at the opposite end of the isolated deck sat Richard and Ash. No clothes. Two men—two strangers—naked in Joyce’s backyard? A flutter of nervous excitement turned Meredith’s body into a battlefield. Leave! No, stay. Watch! No, go.

But how could she leave when, just a stone’s throw across the deck, Richard’s hard cock surged toward the well-defined muscles of his tight stomach? A tingling sensation culminated at the summit of Meredith’s lower lips when Ash reached over to stroke Richard’s rigid cock.

Was this an unwelcome act? Apparently not! Richard’s magnificent hairless chest glimmered with sweat as he swept a hand across Ash’s brawny thigh. Close your mouth, young lady! You’ll catch flies.

This must have been a common occurrence, because Joyce didn’t seem surprised in the least. Meredith tried to be unnerved, offended, angered, upset by the men’s behavior, but it was impossible. Two gorgeous men lying side-by-side in the summer sun and stroking each others’ rigid shafts? June Cleaver would have been long gone by now, but Meredith was in awe of the men’s breathtaking bodies, of their surging muscles, of their cocks sparkling with pre-cum. This was the single sexiest image she’d ever seen.

Richard and Ash didn’t seem to mind her being there, so what was the harm in watching?

A white hand firmly took hold of a thick brown cock while a brown hand slowly jerked off the large white rod. This act ought to be the new symbol of international peace and brotherhood. Two masculine males pumping each others’ stiff rods was far more stimulating than a simple black hand shaking a white hand.

A warm tingling sensation took over Meredith’s body. She clutched her fruit platter for fear she’d drop it and send porcelain and mango flying. Maintain a safe distance.

Get your copy of THE BIRTHDAY GIFT by Giselle Renarde today from eXcessica books!
It's also available through any of your favourite e-book sellers (Fictionwise, Kindle, ARe...the list goes on...)