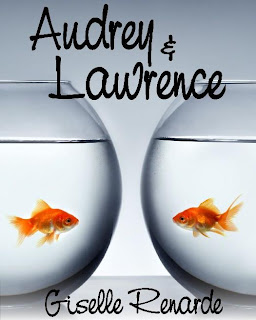 Audrey and Lawrence are so excited to see all their adventures in a single collection, they've created a whole website for it! Okay, so they had a little help from an author friend, but I'm trying to stay humble about my contribution to their great endeavour...LOL

But here I am yapping away when I'm supposed to be sharing a blurb and an except. So, without further ado...

Audrey & Lawrence : The Blurb
An affair is always easy in the beginning. There's plenty of steamy sex and getting-to-know-you. Everything is for now. Immediate gratification. No thought of the future.

This complete collection includes all twelve Audrey & Lawrence stories, many of which make their premiere appearances in this special compilation.

In that moment, looking into those tear-filled eyes, I knew I wanted to marry Lawrence Galloway. The thought had crept up on me before, but I’d always managed to force it out of my mind. After all, I was a career-mistress, or at least it would have been a career if I took any money for my tenderness.

Audrey the mistress: not just what I was, but who. My whole identity was wrapped up in that one dominating aspect of my personality. I was a woman who consorted exclusively with older men, married men. Those sad sorts raised in a bygone era, trapped in loveless, sexless relationships. My body, my admiration, helped them, made them feel good again, feel attractive and virile. What I gave them was a therapy, a rejuvenation. Of course, when Lawrence came along, I was smitten. There’d been no one else since.

But ringing in my ears were the words, “I’ll never ask you for anything.” In the beginning, I’d assured him, “as long as you keep no other mistresses, I’ll do anything you want. I’ll do more for you than you’ve ever dreamed, but I want to be the only other woman in your life.”

As I gazed into Lawrence’s sad eyes that April morning, I knew I was about to go back on my word. “Be my husband,” I said. My tone was utterly flat. It wasn’t a question, wasn’t a plea, it was a plan. “Leave Ruth and marry me. Be my husband.”

The words I’d promised never to utter all those years ago had now been spoken. Lawrence stared at me, seemingly awestruck. Maybe he would marry me. Maybe he loved me enough now.

Reaching out, Lawrence held my cheek, and his touch was the touch of God. It rang through my body like cathedral bells, alerting my cunt it was time for worship. He squinted and the teardrops fell like lava against my chest as he leaned his head toward mine.

Without a word, Lawrence laid a passionate kiss on my mouth. My eager tongue groped for his. It was hot, wet, forceful but yielding. With both hands on his head, I dragged his energy down through every centre along his spine. I dragged it to the very base of his being and squeezed his tight ass when I got there. Mirroring my pose, he scooped my cheeks into his hands, digging firm fingers into complicit flesh. We kissed and we kissed and we kissed. Hot, wet, yielding. That’s when his hard cock found me like a lonely traveller taking refuge from the storm.

Ooh...I want to read more, and I wrote the damn thing! LOL

You can read more too by purchasing Audrey & Lawrence: The Complete Collection from eXcessica Publishing !

I love the Audrey & Lawrence collection and I hope you will too.

Posted by Giselle Renarde at 7:50 PM