My first holiday release of 2010 is THE NIGHT BEFORE RED SATIN CHRISTMAS, and it's now available from loveyoudivine!
Remember Regan and Maisie from last year's Torquere Holiday Sip RED SATIN? Well, they're back and this year they're returning to their hometown where...well, let's just say some emotional family stuff goes down. Not to be missed! 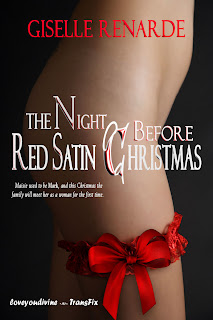 Maisie used to be Mark, and this Christmas her family will meet her as a woman for the first time.

As Maisie and her girlfriend Regan arrive in their hometown, Maisie has second thoughts about letting the family know they’re more than just friends. If her mom and sisters still see her as the family’s youngest son and baby brother, how will they be able to understand that she's not only a woman but also a lesbian?

Although Regan agrees to keep their relationship a secret, the deception plays heavy on her psyche. When Regan is reintroduced to Mitts, Maisie's older sister, the schooldays crush she had on Mitts explodes into fiery desire. Can Regan resist the appeal of her girlfriend's seductive sister? And will the family accept Maisie without reservation on the night before a Red Satin Christmas?

Standing on the front stoop, Maisie turned around and crossed her fingers. Regan read terrified optimism in her eyes. The time between Maisie’s pressing of the bell and the door’s opening felt like an eternity. Regan’s pulse stopped. Her heart ran to hide behind her ribcage. She couldn’t even imagine breathing at a time like this.

Mitts answered the door. In high school, Regan had a huge crush on Maisie’s older sister, and seeing the girl again, she remembered why. Mitts had a quiet beauty about her. Back in the day, she’d worn long sweaters over tight tights. She crimped her hair, or teased it, and wore it in a scrunchy back then. Now her hair was long, dark, and nearly as straight as Regan’s. Like Maisie, she was dressed in black pants and a low-cut red top. Even with a tea towel strewn across her shoulder, she looked incredible.

It was the simplest statement Maisie could possibly have mustered, and her voice was high-pitched when she spoke it. For a moment, nothing happened. Maisie didn’t say anything and neither did Mitts. She was seeing her brother as a girl for the first time ever. When Mitts’ eyes grew wide and her jaw dropped into a gaping emblem of either joy or mortification, Maisie went on to say, “It’s me.”

Mitts took a step back. A smile, whether genuine or put on, broke across her face as she took the tea towel from her shoulder and wiped her hands with it. “Holy shit!” she said, opening the door wider. With her hand, Mitts made a laboured come-hither motion, like she was scooping wet sand. “Get in here, you! Shit, you look…” Mitts shook her head with an expression of absolute astonishment. “Shit!”

“Is mom home?” Maisie asked without taking so much as a step forward.
After another moment of silent, awe-struck staring, Mitts said, “Oh, yeah, for sure.” She turned her head and yelled, “Mom!”

“What?” a disembodied voice hollered back. “I’m on the toilet!”

Mitts turned back to Maisie and, as if she couldn’t hear the whole ridiculous interaction, explained, “Mom’s on the throne.”

“Oh my god, Mitts, do not walk by the upstairs bathroom,” another voice whispered. It was Maisie’s second sister, Kayla, holding her nose as she descended the stairs. “Jesus, the whole fucking hallway reeks to high…”

As Kayla spoke, her gaze seemed to settle on the open front door. Regan watched Maisie’s sister from outside the action, waiting for her recognition to spark, but it didn’t seem to. The fingers pinching her nose slid down until her hand covered over her embarrassed mouth. “Oops…sorry. I didn’t hear the doorbell from upstairs.”

“Kayla,” Mitts said. “It’s Mark.” She whipped her head around fast to look at Maisie. “Shit, I’m sorry. You don’t go by Mark anymore. Do you? Well, obviously you don’t. Duh. That was a stupid question.”

“It’s okay,” Maisie said, though Regan could hear the disappointment in her girlfriend’s voice. “You don’t have to apologize. I understand.”

Mitts shook her head. “No, I’m an idiot. You know, I can’t for the life of me remember your new name.”

A voice rang out from behind Kayla on the staircase. “It’s Maisie. Like my mother, your grandmother. It’s a beautiful name. It’s perfect.”

When Maisie looked up, Regan could feel the happiness coursing through her body. “Mom!” she cried out.

As Maisie bolted through the front door, her mother ran down the staircase. They met in the hallway and dove into each other’s arms. Though Maisie was taller than her mother, something about the nature of their hug dwarfed her, in Regan’s eyes, and she appeared as a little child. “Mom,” she whimpered.

The Night Before Red Satin Christmas
Buy Link: http://www.loveyoudivine.com/index.php?main_page=product_info&cPath=66&products_id=743
And if you missed last year's Christmas story RED SATIN, I encourage you to buy it now because until December 31, 2010, I will be giving all my royalties from the purchase of RED SATIN to LGBT YOUTHLINE, a queer-positive organization that supports young LGBTQ people.
Giselle Renarde
Canada just got hotter!