Festive Frenzy: All The Way by Giselle Renarde

This December, I've devoted the blog to holiday stories by some of the best authors writing in the genre today. While I'm at it, why not throw my Vestal virgin self into the flame? Here's a blurb and HOT HOT HOT excerpt from my Christmas MMF Ménage novella ALL THE WAY. 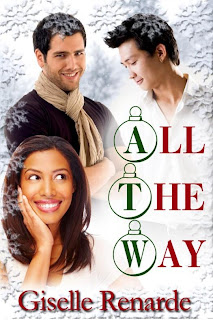 All the Way
by Giselle Renarde
eXcessica Publishing

When Josie invites her long-ago boyfriend Kaz to stay with her family over the holidays, there are a few things she doesn't anticipate. Kaz admitting he's still a virgin after all these years? That's a weird surprise. Her husband Rob's attempt to give Kaz a little relief in the hot tub? A weird and very sexy surprise. But what about the threesomes in the attic, bedroom, and living room, followed by Josie's jealousy when Kaz falls for her older sister? Nope, she didn't see that one coming.
Buy Link: http://excessica.com/store/catalog/product_info.php?cPath=28&products_id=490&os

Adult Excerpt from "All the Way":

Josie ran across the deck in flip-flops, kicking them off as she threw her towel over the cleared deck chair. The cold didn’t even manage to catch her up before she could slip her skin beneath the surface of the warm, warm water. It bubbled away like a witch’s brew as she leaned into the jets next to Rob. She reached for his hand as he reached for hers, and they found each other’s thighs instead, which was just as good. Kaz sat across from them, which seemed fortuitous. Even together in the same hot bubbles, they could get away with murder under the hydric hum of the tub.

“Huh?” Kaz replied, placing a hand behind his ear. “I can’t hear you.”

Kaz shrugged and closed his eyes, at one with his jets. His seat was roughly the same as Josie's, with water flows attacking the stress in her lower back, upper back, mid back, not to mention her butt cheeks. The one thing Kaz didn’t have was a husband’s naughty fingers creeping under turquoise bathing bottoms.

The wetness that dear hubby came across was more than just pool water. It was the very nectar of Josie’s lust for him. God, she wanted him so bad! But she couldn’t very well mount her man with Kaz across the way, even if his eyes were closed. What she could do was squirm out of her bottoms and hold them tight in one hand while she worked her way down to Rob’s cock with the other hand. The very solidity of it made her gasp—or perhaps that was the fingers slowly stroking her clit.

Though she tried not to make much noise while he played with her pussy, it wouldn’t make much difference over the jets. She took a firm hold of his cock, dragging her hand up to the tip until she could feel that skin-on-skin sensation she loved so much. Handjobs were fun, both giving and getting. She opened her legs wide, tossing her thigh over Rob’s as he snuck a wayward finger into her wet slit. Pressing her lips together, she breathed in hard. As he pierced her and penetrated her body with his fingers, she set his cock against her outer thigh and gave it a good smack. Rob loved that; she could see it in his eyes. He reached up deep inside her to rub that sweet spot marked with a g and Josie went wild.

Pressing his palm flat against her clit, he rubbed it in circles. Josie almost felt guilty. There was no way what she was doing to him even half equalled the pleasure he was giving her. Wrapping her fist around his cockhead, she teased the tip alone, pulling on it while she cupped it in her hand. Rob liked being hard in her hands. He like the pressure and the jerking. She liked it too. She liked the rubbing feeling inside her body compounded by the swirling motion on her clit as he stroked it in circles.

Her pleasure mounted as she watched the enjoyment on his face. His lips formed the words I love you before he threw his head back in ecstasy. He held on tight to her pussy, like he’d caught her with a curiously finger-like fish hook. She writhed against his static hold, never letting go of his cock as she ground her pussy against his hand. His palm on her clit felt so good beyond good she couldn’t contain herself. Just as a wayward cry escaped her lips, the hot tub clicked and she knew she had to shut her mouth because the bubbles were going to stop in three…two…one…