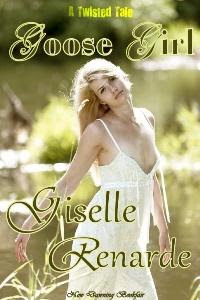 Wow...here's a Tuesday morning surprise: My quirky lesbian fairy tale comedy Goose Girl is currently FREE at All Romance ebooks. Yes, that's right...zero dollars and zero cents... $0.00... FREE! This story is quite different from most of my other lesbian stories, which tend to be much more reality-based and share only a small proportion of the off-beat humour, but it does share a voice with my ebook Sweetheart Rolando.

So get your free copy of Goose Girl now, because I have no idea how long this pricing will go on for. Could just be today.

Go for it here: http://www.allromanceebooks.com/product-goosegirl-550229-150.html

En route to meet her handsome prince, Princess Svana begs her butch waiting-maid Rosamunda for a quick cuddle in the great outdoors. Before Svana can say, "Identity Theft," the brute steals her royal apparel and marries her prince. The poor princess must take a job minding geese alongside an odd young man. Who will save her now?

Story Excerpt
When she was quite young, Princess Svana was betrothed to a fabulous prince whose father was a friend of the queens' from way back in the disco epoch. Even the tabloid reports confirmed prince Everitt was honorable, open-minded and handsome as a fairy's own child. Svana couldn't have been more delighted with the choice, or more excited about her future prospects. Despite her personal principles, the queens had taught her the overarching importance of good looks. A handsome husband meant everything.

On the occasion of her eighteenth birthday, it was time for Svana to take her leave of the caring queens and marry the good royal.

Unfortunately, prince Everitt lived at a great distance. In preparation of her departure, the aged queens packed for their daughter many costly trinkets, jewels, and cups made of gold and silver. In short, they sent with Svana everything which appertained to a royal dowry, for they loved their baby girl with all their hearts.

As you might expect, Svana was not particularly happy to leave behind her many friends, the beloved queens, her birth mom, her pets, and that green grocer who never forgot to import a few mangos from faraway lands. So, to appease their darling daughter, the queens sent along a maid-in-waiting, Rosamunda. The strong-as-an-ox servant was to ride with the princess and hand her over to the bridegroom, making very certain nobody messed with their baby girl along the way. And messing with Svana was a distinct temptation for all who beheld her, such was her incredible beauty. Apart from that one time with the green grocer, which didn't really count since it was underwater, she'd managed to keep herself relatively un-messed-with.

Adult Excerpt
After riding Falada, the speaking mare, for some distance, Svana began to feel a delicious sensation between her legs. The rhythmic bouncing pressure against her lower lips generated an undeniably pleasant heat at the apex of her thighs. This was by far her favorite part of riding, this beautiful wet burn. In time, she could no longer bear the suspended bliss of it and, bringing Falada to a halt in the center of a vast field, Svana surprised her waiting-maid with a request:

Rubbing her fingers against the juicy folds of her craving cunt, Svana panted and moaned. Her ample breasts jumped as she fingered herself, her stiff nipples popping out from under her corset. Her nipples were nearly as dark as the red of her bodice, though her flesh was nowhere near as gold as the precious thread woven through. Stroking the waters of her swollen pussy, the princess abandoned herself to the immensity of her personal pleasure.