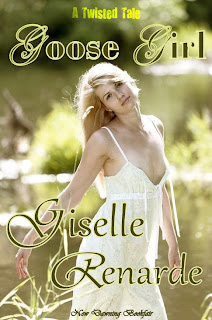 En route to meet her handsome prince, Princess Svana begs her butch waiting-maid Rosamunda for a quick cuddle in the great outdoors. Before Svana can say, "Identity Theft," the brute steals her royal apparel and marries her prince. The poor princess must take a job minding geese alongside an odd young man. Who will save her now?

Adult Excerpt
After riding Falada, the speaking mare, for some distance, Svana began to feel a delicious sensation between her legs. The rhythmic bouncing pressure against her lower lips generated an undeniably pleasant heat at the apex of her thighs. This was by far her favorite part of riding, this beautiful wet burn. In time, she could no longer bear the suspended bliss of it and, bringing Falada to a halt in the center of a vast field, Svana surprised her waiting-maid with a request:

Rubbing her fingers against the juicy folds of her craving cunt, Svana panted and moaned. Her ample breasts jumped as she fingered herself, her stiff nipples popping out from under her corset. Her nipples were nearly as dark as the red of her bodice, though her flesh was nowhere near as gold as the precious thread woven through. Stroking the waters of her swollen pussy, the princess abandoned herself to the immensity of her personal pleasure.
Goose Girl is available now from numerous e-retailers, including:
New Dawning Bookfair
All Romance ebooks
Amazon
Hugs,
Giselle
Posted by Giselle Renarde at 7:01 PM