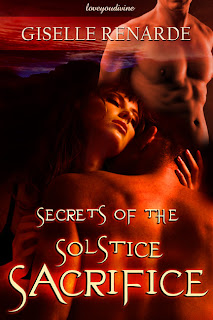 So, I'm trying to speak in S-words as I plug my lovely trans fairy story Secrets of the Solstice Sacrifice.

Professor Selyf is a fay magical, a solitary academic who lives near the mythical village of Gwyllion on a Welsh hillside. When a knock at the door interrupts him from his manuscript, he curses the intruders—until he gets a look at them! The ginger boy, Bedwyn, he doesn't much care for, but Trysta, his beautiful cara, awakens Selyf's heart and the sleeping serpent within.

Excerpt:
He knew she’d return. He sensed it in her look of longing as she left for dinner with that stupid sod of a caru. “You’re here for my bed, I presume?” Selyf said as she slipped in the door. Her eyes revealed everything she longed to say, but he understood her restriction. “Will you sit with me?” he asked, beckoning her into the chair by his desk.

Gazing into the empty seat, she shook her head. “I should not have come,” she said with a look of apprehension in her conflicted eyes. Slipping her bag from her shoulder, she sat in the chair. “You should know you represent a distinct temptation for me.”

Selyf was not easily scandalized, but her bold admission took his breath away. “As do you, for me,” he admitted. “But you needn’t fear me, Fay Trysta. I have spent all my adult life as a solitary magical. I know denial and self-sacrifice only too well. You are safe here in my home.”

With tears in her eyes, she nodded. For a moment, she looked as though she might speak, but then said nothing. As she rose from her chair, she finally blurted, “What if I don’t want to be safe anymore?”

He only stammered, with no response at hand.

“You speak of denial?” she went on. “What do you think my life has consisted of up until now? At my age, I have yet to experience the pleasures of the flesh. In the village, I must pretend to be exactly what I seem, and why? Because only my mother, her mid-wife, and I can know the truth. You have no idea the trust I’ve put in you, Professor Selyf. You hold my very life in your hands.”

“I hold your life,” he repeated, rushing around his desk to meet her. “Why may I not hold your body as well?”

Slipping past him, she hurried to the window, mumbling, “Bedwyn.” Just as Selyf’s heart began to plummet, she continued, “He mustn’t see.” Ensuring the curtains were fully closed, she walked to him like a vixen on the hunt. Her eyes burned like roaring embers as they explored the lengths of his body. Wrapping her arms around his neck, she ensnared him in a kiss the likes of which he’d never imagined. He felt her veiled passion course through his veins as his mouth melded with hers. Their tongues fluttered and surged one against the other. His whole body was so rapt with hers he could hardly breathe. As they kissed, he ran intrepid fingers through her silken hair and down her back. In turn, she held his cheeks and his neck, his back and his sides. When he grasped the firm flesh of her buttocks, Trysta wheezed and broke free.

The look in her eyes was indiscernible but for the temptation they aroused. He almost apologized for being so dreadfully forward before realizing it was she who’d kissed him. Grabbing her wrists, he pulled her into his arms and carried forth the sweet embrace she’d abandoned. After a moment of brave indecision, she gave in to the kiss and melted in Selyf’s arms. His tongue wrangled hers until she broke away once more. Pressing her soft lips to his ear, she whispered, “I’ve never felt like this before.”

At that turn of phrase, her body grew limp in his arms. “Yes,” she said. “I know only too well what you mean.”

You can get your copy of Secrets of the Solstice Sacrifice all kinds of places, like All Romance ebooks and Amazon. Enjoy the Solstice, my friends!
Hugs,
Giselle
Posted by Giselle Renarde at 10:27 PM