Gorgeous Cover for The Finer Things 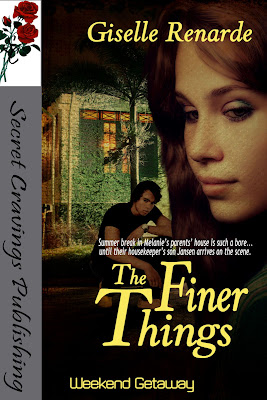 As soon as Melanie arrives home for summer break, she remembers why high school in her absentee parents' house was such a trial. Her parents' maid Sinta is her favorite person around...until Melanie meets Sinta's son Jansen. He's not at all what Melanie anticipates of someone in work clothes, and she's blown away when he mentions that they actually attend the same university. When Jansen offers Melanie a summer job at the factory of his employ, she surprises herself by accepting the position. She's amazed at how good it feels to work hard and go home exhausted -- and making out in the parking lot during their lunch hour is just the icing on the cake! Jansen is full still of surprises, though. He tells Melanie about his mother's early years as the daughter of wealthy parents in Indonesia, and she learns that their maid has led a more interesting life than anyone else she knows.
The Finer Things by Giselle Renarde: Coming Soon from Secret Cravings Publishing
Posted by Giselle Renarde at 12:35 AM