New Release: Callie and the Hipsters 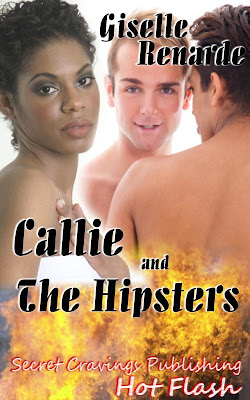 Hot on the heels of Stacy's Dad Has Got It Going On, another sizzling story hits the market. Callie and the Hipsters is part of Secret Cravings' Hot Flash line of Cougar fiction. This baby's all Multicultural MMF and wickedness hotness. Well, not all, because there's also some family drama you're sure to enjoy. Although it's written primarily as an (erotic) romantic comedy, you might just find it a bit of a tearjerker, too.
Callie and the Hipsters is my first release with Secret Cravings Publishing, and with the keen editorial support at that publishing house, it won't be my last. I hope you will enjoy reading Callie and the Hipsters as much as I enjoyed writing it. And, trust me, this book was a joy to write. As a self-professed hipster doofus, I gotta say... we had it coming. ;-)

When Callie’s husband leaves her for a younger woman, she drives all the way out to the summerhouse only to find it's been taken over by hipsters--twenty-somethings who wear plaid and listen to indie rock and eat nothing but raw broccoli. They're friends of her son, Dante, all queer and quirky students at the nearby university.

At first, Callie's irritated that her son has thrown a party in her haven of relaxation, but when she and a bottle of Kahlua stumble upon two young men gettin' it on in her bed her annoyance morphs into arousal. The drink and the day's multitude of disappointments encourage her to join Vish and Evan, pansexual and polyamorous young men who are more than happy to welcome a vibrant older woman into their bed. How will they feel about inviting Callie into their lives?

Callie froze after pressing the door to the master suite open with her hip. She was still in the doorframe when she realized she wasn't alone. The lights were off, but the moon and its twin in the lake illuminated the space well enough for her to make out two bodies writhing in her bed. Hers and Winston‟s bed. Well, not anymore. She very nearly turned tail and left them to it before remembering this was her bedroom, not theirs, and she'd most likely had a much crappier day than they'd had, so she deserved it more.

And then she thought, well, what am I going to use it for? Drinking alone until she passed out? At least they were having fun. They were young! Let them enjoy life.

Callie didn't move. She wasn't really sure where to go, now. There were two girls making out on the couch downstairs, and up here…were these girls too? Whoever they were, they were too into each other to notice her presence. She waited for her eyes to adjust to the moonlight, and when they did she nearly dropped her Kahlua. They were boys—both of them! At first she wasn't sure. She tried to convince herself the white guy underneath the brown guy was actually female, but they were both buck naked and there was no mistaking balls.

Both guys were skinny. Thin arms, thin frames, thin legs—skinny. She had a much better view of the brown guy—Indian, maybe? South Asian, at any rate. He was fucking the white guy doggie-style—did gay guys call it that? Callie didn‟t know—with the covers and sheets all pushed down to the foot of the bed. Although she felt like a total perv for doing it, Callie crept further inside the bedroom and concealed herself in the darkness of the corner by the door. She gulped down her second bathroom cup of Kahlua and poured herself a third. If she was going to act like an utter reprobate, she should at least have an excuse. Drunkenness was a fine justification for any misbehaviour.

The Indian boy had a hand in the white boy's sandy hair now. Callie could just make out the clutch and pull as he forced his lips against the boy's ear. “You like that, don‟t you? You like my cock in your ass.”

“I like it,” the white boy cried. It was the first time Callie heard his voice, and it was higher in pitch than she'd anticipated. “Give me your big dick, Vish. Fuck me hard.”

It seemed to Callie that this boy, Vish, was already fucking him hard, but apparently Vish could go harder. “You sure you can handle any more?” he taunted.

“I can take everything you've got, babe.”

Callie and the Hipsters is available NOW! Buy it today!