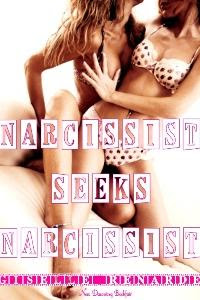 Naomi thinks Szuszu's post is hilarious -- what a great sense of humor! She can hardly believe the centrefold she stole from her dad's collection way back in the day is looking for love. It's not like her to answer a personal ad, but for the infamous Szuszu she'll make an exception. She thinks Szuszu looks fantastic, and Szuszu (who refuses to wear her glasses) thinks Naomi looks just like her. What could ensue but sex, love, and a whole lot of comedy?

I won't say any more, because I'm taking up valuable time you could spend hopping over to ARe to get your FREE copy. Enjoy!
http://www.allromanceebooks.com/product-narcissistseeksnarcissist-627444-150.html
Posted by Giselle Renarde at 8:12 AM