For the blurb and a supremely hot excerpt, read on: 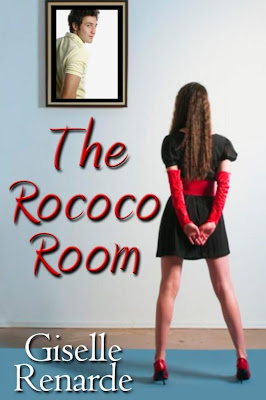 When bad boy Matt leaves the small town of Port Canatangua, Delia follows him to the big city. Delia’s crazy about Matt, and refuses to believe the rumours surrounding his departure. As soon as he finds a good job, he’s sure to get in touch. Until then, Delia takes a dingy little apartment and a position as a security guard at the art gallery. When she falls asleep on the job and finds herself inside a painting alongside Jacob the handsome shepherd, she tells herself it’s just a crazy hallucination. What better place than a dream to find the man of her dreams?

Matt was tall. She had to stand on her toes just to get his top over his head. Pulling it off, he threw it over the smallish bale behind her. His lean chest glowed pale blue as she traced her finger around the black lines of his killer tattoo. Skeleton. Rose. Broken heart.
“What's it about?” she asked.

His pink nipples drew into tight buds as she touched his skin. “Life,” he said.

She tried to understand for herself, but life just didn't seem that painful to her. Even when things got bad, she always had hope for the future. Like when Matt first came to town and wouldn't let her hang with the group. She was young, but she waited it out. It wasn't always easy, but she made it through and everything had worked out just the way she knew it would.
“It's nice,” she said. Lie.
“It's not nice,” he laughed, pressing his body against hers. Her back met the plastic wrapped around their hay bale. “It's melancholy.”
His cock was already hard. She could feel it through her clothes. Without thinking too much, she slipped her short shorts down to her ankles. She'd never done that before. She'd always kept her clothes on while digging into Matt's pants. Now she felt bare and proud. Her undies were baby blue and made of some kind of fine mesh. They cost more than she was used to paying for underwear, but they were pretty. When she bought them special in Sudbury, she knew they were the ones she'd wear when she asked Matt out to the fields.
Matt dropped his pants in three seconds flat. Though she'd seen his cock on many occasions, it seemed special this time. Something new was happening. As she reached for his tempting erection, Matt surprised her. Grabbing her wrists, he pressed them back against the bale. It
happened so fast her heart raced. He didn't usually touch her much, except to pat her head while she sucked him off. Now he held her back with a generous smile on his face.
“I didn't realize until now,” he said, “how much I've taken you for granted.” Easing forward, he bent to press his hard cock against her mesh bikinis. She'd never felt him against her like that before. It felt naughty and delicious. Instinctively, she pushed her pelvis at him. The base of his shaft brushed her surging clit while his tip pumped precum onto her belly. Pressing his whole self close to hers, he writhed slowly against the outside of her body.
Why hadn't she taken her top off before her shorts? She wished she could feel her bare breasts against his moist chest. Maybe best to leave it on, though, considering how sweaty the weather had gotten her. Now he had her by the wrists and all she could move was her mound against his
meat. Pressing herself against him, she helped his big cock stroke her clit. It felt so good she breathed heavy against his bare neck.
“It's in the back pocket of my shorts,” she whispered. “The condom.” She wanted to feel him on the inside.
He let go of her wrists, cradling his cock as he bent to sort through her pockets. While he fished around down there, she took the opportunity to tear off her sleeveless top. Her bra didn't match the panties, but in the dark there wasn't much difference between white and light blue. Thank god for the plastic wrap on the bale behind her, or she'd have hay poking into her back.
“Found it.” When Matt rose to his feet, a mesmerized smile spread across his lips. He stared into tits snuggled close together in clean lace, like they held the secrets of the ages. Reaching behind her back, she unclasped her bra. The straps fell from her shoulders as she curled them inwards. Her bra tumbled down, leaving her breasts bare to be kissed by the humid breeze. Pressing his cock against her belly, Matt cupped her pale tits in his hands. She knew he'd like them. When he squeezed, the condom packet in his left hand jabbed at her flesh. It felt good. Everything felt good. She gasped, throwing her head back against the curved hay bale. Her whole body went into spasm under his touch.
Warm precum trickled across her belly as his aroused cock pumped the creamy stuff all over her skin. “Maybe you should put on the condom now,” she suggested. She didn't want to seem pushy, but she knew it was time. Her pussy felt swollen and wet as she pressed her thighs together. When she imagined his cock coming in, a thrill ran through her.
The Rococo Room is available FREE for a limited time only from: http://www.amazon.com/The-Rococo-Room-ebook/dp/B0051I59QQ/ref=sr_1_1?s=digital-text&ie=UTF8&qid=1323421390&sr=1-1