Sapphic Signs: Having it All and More

My internet's being a bastard tonight, but I wanted to post the final Sapphic Signs promo before I forgot altogether. After spending way too much time browsing Waddington's and then Sotheby's auction sites, Dalia Craig's contribution to the line has me intrigued: 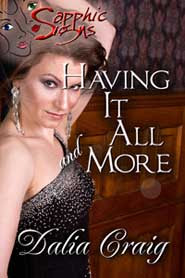 Having it All and More

Two very different women brought together by one set of jewelry.

Josslyn Harper and Paige Railton are bidding for the same antique ensemble at a New York auction. Each has her own pressing reason for wanting to win the bidding war. With neither woman prepared to give way to the other, the bids rocket to almost two million dollars, forcing Josslyn to admit defeat.

A triumphant Paige is delighted with her purchase, despite its high price. However, she hasn’t bargained on encountering a major obstacle in the shape of a very determined Josslyn Harper. Josslyn vows to fight Paige to get the family heirloom back but she hasn’t reckoned with Paige’s tenacity. Paige and Josslyn find themselves growing closer and soon discover they have a lot in common when the power of love overtakes their battle for ownership of the jewels.

Paige placed her first bid at one million and thereafter Josslyn threw all caution to the wind, matching each bid with a steely determination to win the bidding war. By one point four million, just the two of them remained, with the bids now advancing by one hundred thousand dollars each time.

Where is this going to end?

Josslyn hesitated when it came to her turn, almost choking on the tension. Could she really afford one and a half million to own the collection? No contest. She nodded, then watched Paige signal her next bid. They exchanged two more bids then, sickened, Joss called a halt. There was no way she could find one point nine million without a total realignment of her assets. She had ample funds, but most of it tied up in the company or in long-term bonds; she had nothing of that magnitude realizable at short notice. A momentary stab of despair brought her close to tears. She regretted not being better prepared, but who would have reckoned on Ms. Railton pushing the price up to...

The auctioneer fixed his gaze upon Joss, giving her an extra moment to reflect before his gavel fell with a loud bang. The sound wounded Joss like a bullet through her heart.

“Sold to Ms. Railton for one point eight million dollars." The room erupted in applause and a buzz of excited chatter.

Gone! The jewels are gone!

Thankful for the dark spectacles that hid the tears forming in her eyes, Joss looked away, unable to stomach Paige’s triumphant grin without throwing up. Her only consolation was that she had forced Paige Railton into paying way over the odds for her prize and that might prove an advantage in the long run if this current recession forced her to make some financial adjustments to keep afloat. Time to retreat gracefully, to take stock, sell some bonds, realize some other assets, and develop a plan of campaign. She certainly hadn’t given up hope. It might just take a little longer to achieve her aim, her lifelong dream, and have the jewels back where they belonged, but she’d get there in the end. Now, to show there were no hard feelings, Joss steeled herself to go through the ritual of being a good loser -- at least in public. She took a deep breath and waited until Paige had finished consulting with the auctioneer before she approached, cutting out several eager journalist in the process.

“Hey, honey!” Joss performed a double air-kiss, accompanied by exaggerated mwahs for the benefit of the onlookers rather than Paige. “Congratulations. You won that one fair and square.”

“Thank you.” Paige looked more than a little taken aback by this approach.

“You deserve it, honey.” Joss plastered the false sincerity on with a trowel, acutely conscious of the flash photography going on all around them. Effusive exhibitions were her stock in trade; she loved to attract attention to herself in this way, and this occasion gave her the perfect opportunity to go for something big. Something that would make a big splash in the society columns and give Ms. I-like-to-guard-my-privacy Railton cause to remember this day for a long time to come. “What say we go someplace and celebrate in style? My treat.” She linked arms with Paige, intending to give the assembled audience the impression they were indeed old friends, and edged Paige around to face the cameras, using enough pressure to make refusal difficult.

Paige shook her head. “Sorry, I’m expected somewhere.” She tried to free herself.

“Nonsense.” Joss tightened her grip, forestalling all attempts by Paige to edge away. A smile played on her lips and she leaned closer so Paige would hear her above the voices firing a barrage of questions in their direction. “You owe me. I want to hear all about your growing collection. I’m sure you can spare an hour or two for champagne cocktails with an old friend.” Paige’s shudder transferred itself to Joss, sending a rush of erotic heat cascading through her body. Oh my God! She clenched her thighs to trap the raging fire. No more shilly-shallying around, she’d waited too long to feel this amazing surge of pure lust, she had to get this delightful creature into her bed and soon, preferably tonight. A few potent cocktails together with a heavy dose of her now famous seduction routine and Paige would, hopefully, be putty in her hands.