To be honest, I really didn't think this PayPal anti-obscenity backlash would hit me. Not so soon. Maybe not at all.
But it has already. Already! Which I find so baffling because... yeah, I don't write taboo erotica. At least, I never have. At least, nothing I considered taboo, and nothing anybody considered taboo until about two weeks ago.
Last week I wrote a blog post about the impending censorship of "barely legal" titles. And you know what? Even as I wrote that post, I honestly didn't think works of mine that featured LEGAL ADULT characters in their late teens AND EARLY TWENTIES would be targeted. 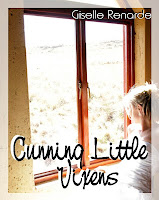 Naive, naive Giselle.
Today All Romance ebooks deactivated two of my ebooks: Cunning Little Vixens and Good Bi Valentine.
Vixens is an "old" book, been on the market for probably 4 years. I guess the mention of "schoolgirls" in this work of historical fiction got somebody's dander up, even though these girls are legal adults. I think they're in their twenties, but it's been a while since I've looked over that book.

Good Bi Valentine is in its second incarnation, a previously published book just re-released a few weeks ago. It is a totally innocuous sex romp. It's a comedy! But I guess someone somewhere had some problem with it. What kind of problem? Hell, your guess is as good as mine. I have no idea why it was censored. Maybe because there are two characters in it who are college students?
Adults are... ADULTS! I said it more eloquently in last week's post, probably because I didn't have my back lodged so firmly up against the "loss of income" wall. Now I'm angry. I am. I'm angry.
And wouldn't you be? If you were [CENSORED]?
In solidarity,
Giselle