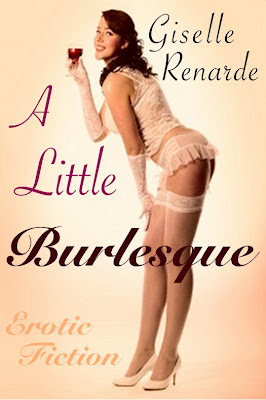 I'm in good company today, sharing a release date at eXcessica with the likes of Sommer Marsden and Selena Kitt.
My new release is A Little Burlesque, which is actually a re-release, a second edition of a book originally called "The Little Burlesque House by the Sea."
And you know what?
It's now 60% sexier!
Okay, that's a made-up statistic, but I did write brand new sex scenes, new chapters, a new ending... just a ton more lesbian love in this little burlesque book!
My favourite sex scene is... hmm... actually, I'm torn between the "Amish Sex" scene excerpted below (okay, the characters are actually Hutterites, not Amish, but you'll find out more when you read the book) and the first-time licking beside the ocean. There's also an MFF menage bondage scene with two of the girls tied together which is really hot.
This book is also twentieth century historical fiction, set in the Canadian Maritimes, but tracking the movements of these fictional burlesque performers through the prairies, through Montreal, and other cities.
Well, enough of my chatter. How about a blurb and excerpt?

A Little Burlesque by Giselle Renarde

Madame Mireille's ocean-side parlour, Les Trois Dames Jouissantes, is one of the last houses holding to the tenets of classic burlesque. They specialize in raunchy comedy sketches, undulating fan dances, chorus lines and, of course, the striptease. In post-war Maritimes, Madame’s burlesque house enjoys notoriety thanks to an all-female cast combining the smart with the sensual.

It was this reputation that attracted the troupe's two newest members. Ginger the saucy redhead has been around the block a few times. She might come on strong, but she’s a master of the comedy striptease. Orchid is young, new to the stage, and embodies all that is innocent--or so she'd have you believe!

Secrets abound behind the scenes, and it’ll take more than slippery fingers to bring them to the surface.

WARNINGS: This title contains graphic language and explicit descriptions of lesbian sex and MFF ménage. Originally published as ‘The Little Burlesque House by the Sea.’

Holding hands, the girls rushed away from the commune as fast as their legs would carry them. When they reached a clearing, they rolled together in the high grasses, laughing and kissing as though nothing could ever harm them.

Though they’d been raised in different countries, at different communes, their respective elders had taught them humility and devotion first and foremost. Before Gretchen, Leili had never looked at anybody and seen a body. Something inside of Leili shifted when she gazed into Gretchen’s glowing golden face, cheeks rosy red, lips a pinkish hue. A spark ignited within her core, and it grew into something physical, a gaping hunger, an aching, wanting thing.

There was a monster inside of her, she was sure, and she let it take control. She unbuttoned Gretchen’s farm dress while the object of her unending lust gazed up into the evening sky, an orange haze brushed purple.

Under her dress, Gretchen wore the same white cotton shift all the other girls wore, but on her it seemed wildly fetching. Leili grasped the top and pulled it down, exposing the girl’s breasts to the cooling air of the night soon to come.

Leili had seen breasts before, but the sight had never made her feel quite so giddy and gleeful. A thick pulse throbbed between her legs every time Gretchen breathed in and those firm young breasts rose like pale mountains. Their peaks glowed pink against the setting sun, and when they drew into buds Leili could no longer resist their insistent call. She leaned down to Gretchen’s chest and took one nipple in her mouth like a suckling babe.

Gretchen cooed, an impatient dove tearing off Leili’s headscarf to run those wonderful fingers through her golden hair. Leili sucked harder, pressing her whole mouth against the fullness of Gretchen’s breast, shaking her head until her hair fell forward to graze and bounce against Gretchen’s bare flesh.

“The taste of your skin,” Leili whispered. “Oh, I can hardly describe its sweetness.”

Pressing Gretchen’s breasts together, she licked the cleave, moving back and forth between two nipples puckered like pebbles.

“Love,” Gretchen gasped, pushing her breasts against Leili’s mouth, insisting. “My love, you mustn’t ever speak of this. You mustn’t tell anyone.”