I can't believe Wedding Heat will be upon us in less than 2 weeks!  It's got its own website, but I'm going to cut & paste the FAQ here to let you know a bit about it.

I'm so excited about this series, mostly because the characters span different sexualities and gender identities.  The stories that make up Wedding Heat's first "season" (I think of it like a TV series) include lesbian, straight, gay, and bi characters, foot fetish, menage, first time (lots of firsts, actually!), taboo, an older couple, a reluctant cougar, a trans woman in love, and family rumours like you wouldn't believe!


What is Wedding Heat?Glad you asked!  Wedding Heat is an erotic series by queer Canadian author Giselle Renarde. Starting in late April 2012, a new Wedding Heat title will be released every two weeks or so.  The stories are all centered around Maggie and Ed’s wedding at a luxury woodland resort, but forget the happy couple—it’s the guests that make this wedding sizzle!  There are family, friends, and co-workers of all genders and sexual preferences attending Maggie and Ed’s wedding.  Some are looking for love, some for new experiences, but nobody anticipated the kind of sexual release they would find in the woods.  We’re talking HOT STUFF, so adults only.


Why Wedding Heat?Lots of readers LOVE weddings, so why not a whole SERIES dedicated to the naughty goings-on at one wedding?  Sure the bride and groom get in on the action, but weddings are about so much more than the happy couple.  Guests flock to weddings with their own expectations, their own baggage, and their own desires.  So, as much as the Wedding Heat series is anchored by the happy couple, it’s really an ongoing tale of the wedding as a whole.  I’m sure most of us have attended more weddings as guests than we have as brides or grooms.


Why a series instead of a book?I love falling in love with characters on TV and visiting them every week, but with so many reality shows on television now, I find I’m watching TV less and less.  I started asking myself where I could satisfy my need to form those kinds of bonds with fictional characters.  Stories?  A series of stories?  Yes!  Perfect.  That’s why I started writing the Wedding Heat stories.  I figured there were probably other readers in the same boat, people who want something to look forward to as the weeks go by, something to fill that void.  That’s why I decided on short stories–they would take up about the same amount of time as watching a TV show.


Where can I get Wedding Heat stories?Each installation of Wedding Heat will be sold as an individual ebook from eXcessica Publishing and available through pretty much every major distributor–like Amazon, All Romance, and Barnes & Noble.  Though there are common threads throughout and readers will get the full impact of ongoing plot lines by reading stories in order, the series is written in such a way that you can pick up anywhere and enjoy a really sexy story.


What do the covers look like?The covers of Wedding Heat titles all look something like this one for the first ebook in the series: 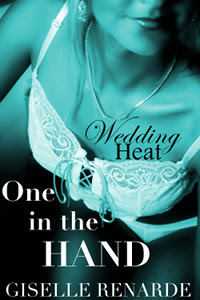 Wedding Heat titles will hit the market beginning April 2012.  Keep an eye out for them and get in on the action!