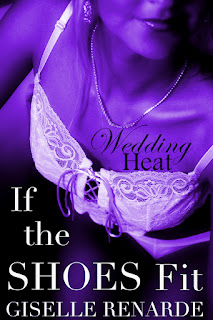 Now Farrah's got her own Wedding Heat story, and it is so gushingly beautiful and nervous and romantic that I just love it to bits.  It's a reunion story, at its core.  Farrah had a mad crush on Lane, a family friend, back when she was a teenaged boy.  Lane was a little older--not by much, but it was enough that he sort of freaked out when Farrah (then Ralph) confessed to the crush.

That crush has grown into a longing sort of love over the years.  For Farrah, no other man could ever live up to Lane.  Now they have a chance to start over.  Lane is certainly interested, but he's got secrets of his own.  I'll give you a hint: they're shoe and foot fetish related.

A lot of transgender erotica uses a trans woman's pre-op or non-op status as a shock factor, something that attracts, revolts, intrigues, etc.  I turned that on its head.  The story is told from Farrah's POV.  She knows she's trans. So does her family, so does Lane, so does everyone.  Her body isn't a surprise.  Lane holds the secret.  He's the one who's worried Farrah might reject him when she discovers he has a penchant for...


“Lane!” Farrah’s heart clenched. Why weren’t there more mirrors in this place? What if she had lipstick on her teeth?

How could she forget him? Every time she closed her eyes and imagined her own wedding, this man awaited her at the altar. Her heart thumped like a bass drum.

“Hi, you.” The warmth in Lane’s smile melted her like chocolate. Her hand trembled as he took it, pressing her palm between both of his. Farrah’s hand was larger and normally she’d have been embarrassed, but right now she was more worried about her knees giving out.

“I haven’t seen you in…” With a blush, Farrah tried to remember how many years it had been since she’d professed her love to this family friend. “Years.”

“I go by Farrah now,” she offered, breathless.

“After Farrah Fawcett, I bet.” He winked conspiratorially.

Her heart fluttered like she was caught in his net. “You know me too well.”

Lane smiled, his gaze moving over her like a sweeping warmth. “Your mother said you looked good, but good doesn’t begin to cover it. You look… Wow, you look…”

Farrah blushed when Lane couldn’t find the words. Her heart felt too big for her chest and she said, “You too. You look… Wow!”

Her mother made a little throat-clearing sound, and Farrah felt suddenly quite bashful. Even if she could quit stammering like an idiot, she couldn’t very well flirt in front of her mother. It just wasn’t in her.

To her great surprise, her mother suggested, “Why don’t the two of you go for a little walk and get reacquainted?”

And then off she went without waiting for a reaction, leaving them perfectly alone.

“I’m not sure how far I’ll get in these shoes,” Farrah said, drawing’s Lane’s gaze down to her heels.

“Yeah.” Lane chuckled, seeming as nervous as Farrah felt. “Those shoes weren’t made for walking.”

So far Wedding Heat: If the Shoes Fit is available from: