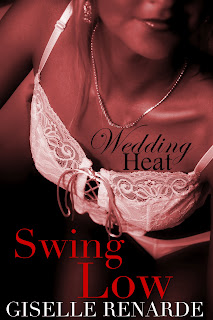 Super-quick post today, and a plea that you pardon my recent absence from all forms of social media.  Jury duty has been kicking my ass up and down the block (mainly down, because the courthouse is downtown) and I've accomplished next to nothing.  But that doesn't mean I'm not irritable.  Oh, goodness, you should see me now.

Look at the time... damn it, back to court.  Okay, here's the blurb and a dirty excerpt.  Gotta go!


Forget the happy couple—it’s the guests that make this wedding sizzle!

Denitsa stood at the foot of the bed and waited.  With every breath, she felt her bodystocking dig more ruthlessly into her skin.  She could smell Suki’s cunt.  Their mutual excitement was the perfume of nymphs.

“Stand still,” Neil instructed.  He fitted a belt around Denitsa’s hips and buckled it at the back.  She knew what it was by the heaviness in front of her.  There were straps that went around her upper thighs too, and Neil buckled them so tight she wondered if she’d be able to move her legs.

The cat o’nine tails rested over Neil’s shoulder as he strode toward Suki’s upturned ass.  Grabbing her cheeks with both hands, he spread them wide, giving Denitsa a superb view of her sweet asshole.

“I want you to fuck little sister’s ass,” Neil said before spitting into the groove of Suki’s crack.  Her hole puckered as his frothy spit lingered above it.


Posted by Giselle Renarde at 2:01 PM