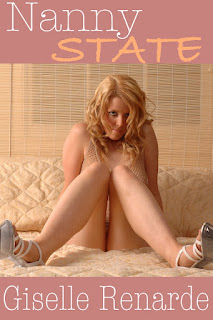 When Summer moves in with her mother’s friend, she expects to be treated like an adult. Fat chance! Victoria exerts control over every aspect of her life, protectively setting parental controls on the television and demanding Summer come straight home after her university classes.

The unlikely couple embarks upon a series of naughty adventures, from suckling to discipline to diapers. But what happens when Summer wants to include a girl her own age? Will Nanny punish the wayward girl or accept another charge into their uncommon household?

Warnings: This title contains graphic descriptions of lesbian sex and threesomes, age play, spankings, discipline, domination, and other fetish activities that may be considered objectionable to some readers.

Victoria gazed into my eyes for only a brief moment.  “Perhaps it would be better if you called me… Nanny Victoria?”

My chest froze like I’d taken a big swig of ice water, then warmed like I’d followed it up with a shot of whiskey.  Something gripped my chest, but my heart pounded too hard to stay bound by unseen forces.

“Nanny.”  I felt the word out, savouring the way my tongue struck the roof of my mouth as I spoke.  I liked that sensation.  It felt like sucking.  “Nanny Victoria.”

“Summer,” she said, opening the top part of her nightgown.

I’d never seen her breasts before.  Until that night, I hadn’t really thought of her as having them.  They weren’t old lady boobs, they weren’t saggy, and I was glad about that.  The skin there was pale and soft, which made her nipples look even darker.  What most surprised me, aside from their youthful perkiness, was the sheer size of them.  They were nearly as big as my head, or at least that’s the impression I got.  Maybe they only seemed bigger seen though my amazed eyes.

“Would you like to suck Nanny’s nipples, Summer?”  She shifted my hair behind my back, running her fingers through the strands.

I tried to say no, but the word caught in my throat, and I found myself nodding instead.  Cupping my hand around one breast, I eased down against the other, feeling her hard nipple press into my cheek like a warm pebble on a pillow.  I could feel her watching me, waiting, and I wished she would touch my bare breasts too, but somehow I knew she wouldn’t.

Pressing my little tits against Nanny Victoria’s nightgown, I turned my head until her nipple met my closed lips.  She inhaled sharply, arching her back, pressing her breast against my mouth until I opened up to let her inside.

“Oh, Summer!”  She cradled my head in her hand as I licked her pursed tit up and down with the tip of my tongue.  “Suckle, dear.  Suck it.”

A hot ache pulsed in my pussy.  When I started sucking, feeling her hard nipple against my soft velvet tongue, I wanted to touch myself so fucking badly I could have screamed.  I squeezed my thighs tight together, and my shaved pussy lips pressed my engorged clit from both sides, but it wasn’t enough.

“What’s wrong, baby?” Nanny asked as I squirmed in her arms.  “What’s the matter?”

I suckled her nipple at an easy, gentle pace, but I couldn’t stop wriggling.  It was quite a shock to realize there were hot tears pricking my eyes.  I couldn’t understand it, but when I looked up at my new nanny, her gaze was so loving, so caring, that my tears streamed down my cheeks in warm streaks.

“Use your words,” she said.  “Tell Nanny Victoria what you want.”

Pulling away from her nipple, which was now significantly fatter and redder than the other one, I pushed down on my shorts, kicking them off the side of the bed. When I opened my legs and reached for my clit, Nanny Victoria swiftly intercepted.

“No, no, Summer.”  Grabbing my wrist, she used my hand to press my thighs closed.  Her grip was unbelievably strong.  “That’s a naughty place to touch.”

I wanted to respond, of course, but I had no words.  A whimpering noise surged from my throat.  All I wanted was to play with my pussy, but Nanny wouldn’t let me.  She wouldn’t let go of my hand.


Nanny State is available from eXcessica Publishing, and pretty much everywhere else you'd want to buy an ebook
http://www.excessica.com/books/index.php?main_page=product_info&cPath=17&products_id=540