If you enjoy a little comedy, a little romance, and of course some lesbian sex, Narcissist Seeks Narcissist just might be the story for you: 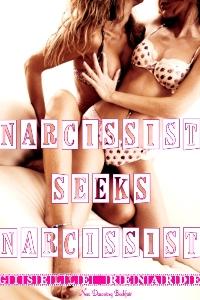 Szuszu the former model has inhabited a world of sex, drugs, and far too much scotch since she was just a teenager. All these years, her best friend Babette has been right by her side. Now that Babette is married and setting off on a world tour, Szuszu feels utterly abandoned.  As a pre-departure joke, Babette writes up a silly and snide little personal ad, which Szuszu proceeds to post, hoping to attract a woman who looks just like she did when she was young.

Naomi thinks Szuszu's post is hilarious -- what a great sense of humor! She can hardly believe the centrefold she stole from her dad's collection way back in the day is looking for love. It's not like her to answer a personal ad, but for the infamous Szuszu she'll obviously make an exception. She thinks Szuszu looks fantastic, and Szuszu thinks Naomi looks just like her -- owing to the fact that Szuszu's vision isn't what it used to be and she's too proud to wear glasses.

"Can't even think straight," Babette mumbled. "All right then, you want to know what I wrote while you were babbling on about your glory days? I wrote up a personal ad, darling: Narcissist seeks narcissist for mutual adoration. Turn-ons include mirrors, soup spoons, darkened windows, and other reflective surfaces. Must enjoy photo albums, the sound of her own voice, and endlessly reliving days of cover girl glory. Doppelgangers will receive preferential treatment--see attached photo. Looks trump substance. Models preferred. Serious enquiries only."

When Babette had finished reading from the serviette, Szuszu offered weak applause. "So you're going to dump the dairy cow after all these years. Good show, darling. It's about time."

Babette's ears turned bright red and she shook her head. "I am not dumping anybody. This ad isn't for me--it's for you. You're the narcissist, darling. You're the one unlucky in love."

"Luck has nothing to do with it, Babs." Szuszu polished off the last of her scotch and held up her glass for more. "I'm not like you, darling. I don't buy into your little cult of Noah's Ark, everyone in neat little pairings."

"It's hardly Noah's Ark if it's full of lesbians," Babette muttered.

I guess I should mention that all these ebooks I'm excerpting from are available from most big retailers (like B&N, Amazon, ARe) as well, but if you love your authors, do try to buy directly from the publisher's site.  We earn more pennies on the dollar that way, and then we can feed our cats and pay our rents and keep on writing.