I've written a lot of ebooks.  I'd give you a number, but in truth I've lost count.  Somewhere around 100 maybe?  I don't even know.

When you have a lot of work on the market, it's actually kind of hard to market it.  And when I say hard, I mean overwhelming.  Especially when you've written books you've totally forgotten about.

So I'm sitting here, trying to remember.  I'm checking out my publishers' sites and saying, "Hey, lookie here!  I wrote that book!"  I'm also thinking, I should post this excerpt on my blog.  So that's what I'm going to do.  And I'm starting with... (drum roll please)... 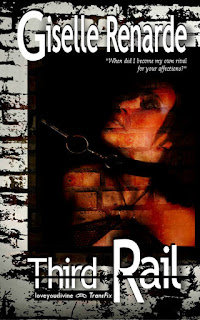 Third Rail, published in the transfix line at loveyoudivine Alterotica:

Perhaps it is a touch unusual to have a girlfriend and boyfriend both living in the same body, but Kokoro doesn’t classify her relationship with Fiona and Martin as strange. Kokoro rides the third rail, a dutifully subservient lover to both aspects of her transgendered partner’s psyche.


“Come on, let’s say goodnight to Fiona,” Fiona said, shifting Kokoro from her lap and heading for the stairs. She extended her hand, but still Kokoro stayed planted in the kitchen. “Why aren’t you coming? You really think I’m going to let you sleep on the floor?”

“No, it’s not that,” Kokoro replied, cuddling into the chair abandoned by her beautiful Domme.

With a tender smile, Fiona ambled across the kitchen. Kokoro observed their blue-tinged reflections in the glass door as her sensitive lover kissed her hair and consoled, “I hate saying goodbye to Fiona, too, but I can’t very well wear the wig to bed, now can I? And, anyway, even after Fiona’s gone, you’ve still got Martin to play with.”

“Yeah…” Kokoro smirked, scrunching her nose in a deliberate effort to appear snide. “Not really the same, is it?”

Fiona shook her head, slipping the gold bracelet from her wrist. “When did I become my own rival for your affections?”

“I’ve never once seen your boy clothes when I’ve been here,” Kokoro realized.

Fiona shrugged, tilting her head. “I don’t like to look at them unless I have to.”

“Like you’ll have to tomorrow morning when you get ready for work?”

Shuddering, Fiona moaned, “Don’t remind me.” A winged insect of some sort abducted her gaze, and she focused on it for a long while.

“I could close my eyes, if you’d prefer,” Kokoro offered, breaking Fiona’s concentration.

“While you change. I don’t have to watch if you don’t want me to.”

Kokoro sighed. “You make everything so difficult.”

“Oh yeah…” Kokoro replied, watching Martin slip off one then another pair of big white underpants.

“Do you really have to wear granny panties? They are so unattractive. Would it kill you to buy a little lace, a few thongs?”

Now it was Kokoro’s turn to raise an eyebrow. “I’m guessing we’re still talking about thongs?”

“Yes, Koko,” Martin scolded as he fished through his drawer of silky nighties, settling on the pink one. “Why? What would you prefer to have crammed up your backside?”

“I don’t know,” Kokoro gurgled. “Weren’t you just saying you needed some place to conceal your cock?”

Martin growled deep in his throat as he turned off the light. Crawling on top of the covers in the pitch-blackness, he was on top of her in no time. He found her intuitively, found her mouth with his as she ran her hands across his silk-lined back, sighing at the luxury.

“Do you know how hot you get me, Koko?” he whispered, his breath sizzling in her ear. Martin’s voice was not Fiona’s. There was an overlap, but it was not the same. This voice had depth and a resonance that brewed lust in her core.

***
I actually made a trailer for this wee $2 ebook, and you can view it at lyd's site: http://www.loveyoudivine.com/index.php?main_page=document_product_info&cPath=66&products_id=570 Just scroll to the bottom of the page.  You can also buy a copy there, which would please me greatly. heh.