The stores around here are full of candies and costumes--it's beginning to look a lot like Halloween!

And, to celebrate all things paranormal, I've got a lot of ghostie/fantasy/witchy/werey/vampy ebooks hitting the market this October.  The first one is a lot of fun.  It's a lesbian comedy about a couple of urban fairies trying to make a quick buck off cash-for-gold programs.   Good luck, right?  Anyway, they don't actually have any gold, so... I guess they're going to have to break into a couple mansions and steal some.  That's lazy fairy logic for ya. 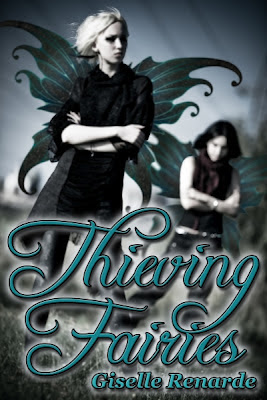 Description
Fairy mutt Honoria and her purebred wife Shelagh are knee-deep in junk mail and overdue bills. Their bachelor pad apartment isn't big enough for the two of them and they spend their days at each others' throats.

Despite the difficulties of city life, Honoria's dead-set against using their magical powers. Even when Shelagh devises a plot to make money off fairy gold, her girl won't go for it. Honoria would rather steal the old-fashioned way than end up in a military facility after the government catches wind of their abilities -- which isn't so far-fetched a concern.

When Shelagh insists they can earn a living off cash-for-gold services, the irritable couple begins a career in small-time thievery and find a life of crime provides a welcome boost to their sex life. Who knew breaking and entering would be such a turn-on?


Excerpt:
“No,” Honoria said to pre-empt whatever unlawful request her wife was about to make. “I’ve gotten myself into enough trouble for you. Do it yourself this time.”

With theatrical pout, Shelagh said, “You don’t even know what I’m going to ask yet.”

“Yes, I do.” Honoria shook her finger like a turn-of-the-century schoolmistress. “You put on those puppy dog eyes and spin me a tale about criminal behaviour solving all our money problems. You know what would solve our money problems? If you got a damn job!”

Shelagh threw her head back with a cruel laugh. “Oh, right, like this is all my fault. Maybe if you could last more than a week at a job without getting fired ...”

“Hey, I told you I’m not good with people. Those damn managers want you to be sickeningly perky all the time. You should hear the way customers talk down to me! I’m not going to take that shit.”

Tightening her housecoat around her waist, Shelagh took a deep breath. The argument was not ingratiating Honoria to her idea. “Well, my plan doesn’t involve interacting with people. Exactly the opposite.”

Honoria tried to ignore her. She picked up a novel from the bedside table and flipped through it. She couldn’t reject Shelagh’s idea without at least hearing her wife out, could she? That didn’t show much respect. Picking up the TV remote, she hit the mute button. “You get one pitch. Make it good.”

“Okay, here’s what I’m thinking.” Shelagh’s fingers wriggled with excitement. If Honoria wasn’t so on edge, she might even find it cute. “Gold is at record-setting prices right now ...”

She smiled. “Yeah, I heard the Australian, too.”

“No flying.” Shelagh should know better than to try that one. Honoria had a hard and fast rule about flying in the city.

“Fine,” she said through gritted teeth. She took a quick breath, and the saccharine smile once again reared its syrupy head. “You take the subway out to Rosedale, sneak into a few houses, get us some gold, and send it off in the convenient postage-paid envelope.”

Honoria stared right through Shelagh’s pyjama-clad body to the muted talk show on television. “You want me to steal for you,” she stated calmly.

Honoria couldn’t believe her ears. She shook her head in disbelief. “You sure know how to get me riled up, woman.”

“No.” Honoria put her foot down. Nobody back home believed she could survive in the city without using her gifts. She had to prove them wrong.

“What could be easier?” Shelagh said in a nursery maid’s sing-song. “You go outside, fetch a clump of grass, say a few words, and poof! We have gold.”

Honoria had said no, and she’d say it again. “I’m not going to cheat. You know I won’t, so stop tempting me, okay?”

If only Shelagh would put her powers of seduction to work in the bedroom, maybe they wouldn’t argue so much. Gone were the days of furtive glances and playful grabs, nails dragged across backs and fists pounding on the wall while neighbours shouted, Keep it down in there!

Maybe they needed an actual bedroom before they could re-ignite their bedroom eyes.

“You know exactly what’ll happen if we send fairy gold. We cash our cheque and, ten minutes later, our gold turns back to grass cuttings.”

“But it’ll all be mixed in with other people’s gold by then. They won’t know it’s ours.”

“No, Shelagh, no! You can’t think that way.” A shooting pain coursed through her temple and she pressed her palm to the side of her head. It hurt Honoria physically when they quarrelled. She couldn’t take much more. “You have to assume whatever can go wrong will. If we get caught cashing in fairy gold, what happens? We get found out. They track us down thinking we’re aliens or whatever. We get forced into some military testing facility like Adrianna was. I can’t let that happen to us, babe.”

With a deep sigh, Honoria considered the big picture. Rent was due in two weeks’ time. Where the hell was it coming from, if not Shelagh’s little scheme?

Thieving Fairies is now available from JMS Books, All Romance, and more!