UPDATE: In The Eye's original publisher has gone out of business, but the ebook's available in its second edition from Amazon http://www.amazon.com/dp/B00I09LXR2

When I say "new release," what I actually mean is "re-release."  My MMF menage ebook "In the Eye" was once available as a Sip from Torquere Press.  When the contract expired, it moved its ass over to the BiLine at loveyoudivine Alterotica.  Three sexy storm troopers... I mean, storm chasers... lust after a tornado. 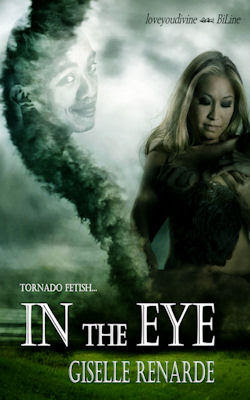 How will Susitna react to Dale and Xu’s tornado fetish?

Dale and Xu are not your typical tornado-chasers. These guys don’t pretend to be in it for the research. It’s a thrill ride for them, that’s all. Hell, they spend September to May bettering their minds as Grad students. They could use a little excitement in their lives.

When Susitna begs to come along on their annual adventure, Xu is absolutely opposed. Dale convinces him to take her on as a driver so they can fulfill their fantasy of getting naked in the backseat during a storm--but they don't tell her that! How will Susitna react to the boys' storm fetish?

As Dale surged forward, the air seemed to get very heavy. He spotted Xu and Susi in the distance before he noticed the darkened cloud system over a bright afternoon sky. "Did you find Charlie?" he called to them, out of breath already. When he heard the dog barking like crazy up ahead, a familiar sense of trepidation overtook him.

Xu pointed way out into the distance. "What do you think?"

Jogging up to them, Dale stared up at the charcoal grey sky. The winds were picking up and, without any more warning than that, they were caught in a downpour.

"What the fuck, man?" Susi shouted, picking up Charlie and holding the puppy tight against her chest. Charlie stopped barking, and now sat quivered against her owner's ample cleavage. "Where did this come from?"

Dale couldn't offer any response. He'd planned on tracking storms, or at least seeing what the real storm trackers had to say this evening when they arrived at some cheap and cozy motel in Omaha or thereabouts. When he looked to his partner in crime, Xu said the same thing. "I haven't had a chance to listen in yet. I wanted to get my course-planning out of the way first." He held up his cell phone, shielding it from the onslaught. "I don't get reception out here."

"Wherever here is," Susi said through chattering teeth. Her dark, wet hair slapped her face, and she had to shout over the high winds. They should have been running, trying to escape this massive rainfall, but there was nothing quite so mesmerizing as a possibility.

Coming soon to all those other places...
Posted by Giselle Renarde at 11:54 AM