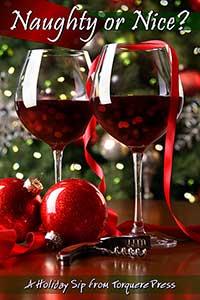 Guess what?  I wrote a lesbian Christmas story! And guess what else?  You can read it!

Well, you have to buy it first, but then you can read it. (There had to be a catch, right?)

Anyhoo, this new release of mine is called "Sugar Bush" and it's a lesbian polyamorous bondage and temperature play thingy... with maple syrup, because I'm Canadian.  If you enjoy my lesbian kink, give Sugar Bush a taste.  You might just like it.

"Is that Jeanette?" Nanaate's mother calls from the kitchen. I hope to find her cooking up fry bread, just like my gran did when we were kids, but no. She's got the Martha Stewart cookbook splayed on the table. "You didn't go overboard, did you?"

"Me go overboard?" I ask, laughing. "Look at all this food! Are you cooking for the troops?"

Rather than answering my question, she says, "Nanaate's been going up to the sugar bush every day, getting it ready for you. Trees are all tapped."

My cheeks blaze, and I know how guilty I must look. Rick understands the intricacies of our relationship, but Nanaate's parents? It makes my stomach flop, the idea of them picturing their daughter and me naked together in the sugar hut. I want them to think it's all innocence and tradition, just two old friends spending a night together in the wilderness. A city girl revisiting the places of her youth.

Dinner is abundant. The children chatter like monkeys while Rick argues local politics with Nanaate's parents. Neighbours have joined us, Greta and John and their four children, people I don't know well enough to be chatty with. They ask what the city girl does in the city, and I tell them about the programs I've created for two-spirit people -- youths, homeless, elders, sex workers.

Greta glances swiftly at her little blond children to make sure they haven't heard the wicked lady talking about prostitutes.

"Two-spirit?" John asks. "That sounds like something, all right."

He obviously hasn't heard the term before, so I clarify. "Aboriginal people who are what you might call transgender, bisexual, gay, lesbian -- we use the unifying term 'two-spirit' to identify. If we choose to, that is. Some Native people choose to identify as gay or queer, whatever they prefer, but my programs still serve them."

Greta's blue eyes are about to burst. Her lips purse so hard they're just one straight white line. "I'm not sure this is appropriate dinner conversation."

The city girl has been well and truly put in her place.