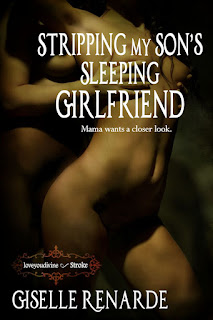 At first, I held off joining this trend of writing quick, smutty stories to be published in ebook format, and now I'm wondering why.  After all, I started my erotica career writing confession-style letters *cough cough Hustler Fantasies* and, in truth, I LOVE writing smut.

Thus, Stripping My Son's Sleeping Girlfriend.  It's about a mom seducing her son's sexy sweetheart.  Though, I use the word "seducing" very loosely.  Her approach is a little less artful than a textbook seduction.

Anyway, if you're interested in something hot and porny with not much plot or character development, buy this book!

Darin's mom can't stand his sexy new girlfriend. Kali parades around the house in see-through blouses and skimpy skirts, showing off her thong with every bend. That raunchy girl turns her stomach... until the morning she finds Kali passed out alone in Darin's bed. Asleep, Kali doesn't seem so bad. In fact, Mama can't resist getting a closer look! Will her son's sleeping girlfriend wake up to a screaming orgasm, or screaming bloody murder?

Maybe every mother thinks her son’s girlfriends are trouble, but Kali seemed to go out of her way to prove me right. She wore sheer tops I could see her bra right through, and skimpy little skirts. Every time she bent over, she gave me a good look at her ass crack and her skanky thong.

I hoped my boy would get bored with her. I hoped she would just go away.

More and more, Kali was spending nights at our house. Darin’s room was all the way at the other end of the hall, and still I could hear them fucking at two in the morning. I had to wear earplugs just so I wouldn’t have to hear that little bitch crying out, “Yes, baby! Fuck my ass! Give it to me, hard!”

Everything about her turned my stomach.

And then, one Saturday night, the pair of them came stumbling home at three in the morning, crashing around downstairs, getting on my last nerve. I tore a strip off Darin because he was supposed to work his restaurant job the next morning. How the hell did he expect to function when he’d been out drinking all night?

I don’t remember half of what I said, but Darin gave as good as he got. Kali was smart enough to keep her mouth shut. She was probably trying not to puke.

In the morning, I had to drag Darin out of bed. From the looks of it, they’d been so drunk they’d collapsed, side by side, on top of the covers. They were both fully dressed.

After I’d pushed Darin out the door, I went about my Sunday morning chores, trying to make enough noise to drive Kali out of my goddamn house. I even vacuumed right outside Darin’s bedroom, but Kali just buried her head in the pillow.

When she rolled over, something else happened, too—her short skirt flipped, revealing the gentle swell of her beautiful, bare butt.

My breath caught in my throat because, my god, her ass was perfect. I shouldn’t have been staring. She was my son’s girlfriend, after all… but, hell, it was my house! And yes the girl drove me crazy, but I couldn’t take my eyes off her naked lower half. Well, she still had her strappy stilettoes on her feet, but aside from that, she was largely nude. Was she even wearing underwear?

I crept closer to the bed to get a look. Between her legs, I could just see the silky gusset of a little red thong. It amazed me how un-hairy she was. She must have had one of those bikini waxes… what were they called? Bermuda? Barbados? No, wait—Brazilian…

We never did that sort of thing, when I was her age. We didn’t even trim our bushes, back then.

Where can you get this ebook?  Here:

All Romance (I can't believe they haven't banned it yet!): https://www.allromanceebooks.com/product-strippingmyson039ssleepinggirlfriend-1078415-148.html

Posted by Giselle Renarde at 5:33 PM