The Kink in Kinksters: In The Eye 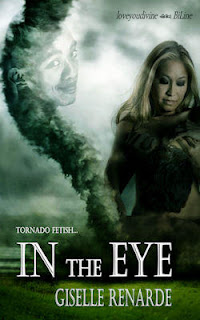 In The Eye was originally published as a Torquere Sip. After its contract expired, it was picked up by loveyoudivine as an ebook. Now it's also available in the Kinksters anthology I've been talking up over the past week.

Excerpt from In The Eye:

“No, I get it,” Susitna snapped.  Scooping up her King Charles spaniel, she rose to her feet. “Come on, Charlie. It’s a boy’s club. No girls allowed. What else is new?”
Dale stood to follow her out of the Grad commons, but Susitna surprised him by standing still. “It isn’t a boy’s club,” he said, even though there was only a narrow sense in which that was true. “Wait, you named a girl dog Charlie? Weird.”
“You’re not allowed to bring dogs in here,” Xu spat before Susitna could answer. People are allergic.”
“Are you allergic?” she shot back as the little dog licked her chin.
Xu looked down at the ping-pong table and rolled his eyes. “No.”
“Then shut up.” When Susi turned back to Dale, her expression softened. She was obviously willing to put up with Xu’s attitude only because she was so fond of Dale. “Are you allergic?”
Dale smiled at the care in her dark eyes, and shook his head. “No, I love dogs.”
Muttering something about dander, Xu gripped his ping-pong paddle and said, “Come on, Dale, stop wasting your time with this chick. We’ve got a game going, here.”
There was no taming Xu. He was rude to everybody until he learned to trust them. He’d learned to trust Dale long ago, which is probably why he held on so tight. But for Dale, there were other avenues to explore. Sure, he liked Xu. Loved him, even? But every instance of intimacy, whether sexual or not, seemed like just a moment in time. Nothing was set in stone.
“I’m sorry,” Dale said to Susitna. “I mean…maybe you can come.”

“Dale!” Xu hissed. Bouncing his ping-pong ball off the smooth green table, he whacked it so hard the little white sphere went soaring across the room. They all watched as it struck the ceiling before bouncing off the far wall and then plummeting to the floor. Charlie yapped like crazy and struggled to escape Susitna’s hold as the ball bounced up high a few times, and then rolled underneath the ping-pong table.
The dog kept barking, even as Susi shook her head and said, “Anyway…”
“You can’t come,” Xu said. “And it’s not because you’re a girl, it’s because you’re brown.”
Dale couldn’t believe his ears, but it was Susi’s jaw that dropped. After an eternal moment of disbelief, she threw her head back and laughed. “Fuck you!”
“Xu!” Dale snapped. “Seriously?”
“What?” Setting his paddle down on the table, Xu explained, “Bringing a brown girl along for the trip isn’t the best way to blend into the Midwestern United States.”
Susi set her dog down on the floor, pulling the leash tight so it couldn’t chase the forgotten ping-pong ball. “Oh yeah, like a Chinese boy’s going to blend in that much better.”
“I might not blend in, but at least I won’t get put on a terrorist watch list!”
“What the fuck are you talking about?  A, I was born in this country, and B, my family is Indian…and Hindu! It’s not like I’m a goddamn sleeper cell for Al Qaeda!”
Xu shook his head self-righteously. “Where we’re going, none of that matters. Brown is brown.”
“Okay, okay, okay!” Dale couldn’t bear another second of this ridiculous argument. “Cut it out, you two!”
To Dale’s surprise, they both shut their yaps and stared, wide-eyed, in his direction. He wasn’t sure what to say next. Dale had never been subjected to any kind of racism during their past trips to Tornado Alley, but as a blond-haired, blue-eyed white guy, he was hardly likely to be targeted. Xu might be right about small-town xenophobia, but Dale wasn’t about to turn Susitna away on account of her skin color. Anyway, he wanted her to come along on their trip.
“Xu,” he began, keeping cryptic in front of Susi. “Maybe it would be a good idea to let her come along…you know, to act as lookout and even do some driving when we’re getting close?”
Dale watched as Xu’s expression turned from irritated to intrigued. He kneeled down to pet her pooch. “You have a driver’s license? Are you a good driver?”
“Yes and yes,” she replied, glancing up at Dale. “You want me to drive into a tornado?”
“Possibly,” Dale admitted. “Very possibly.”
***
If you like a story with characters who challenge each other with brutal honesty, lots of comic repartee, and a few twists and turns (and tornadoes!) you might just enjoy In The Eye.