First of the Season! Wedding Heat: Catering to the Masses 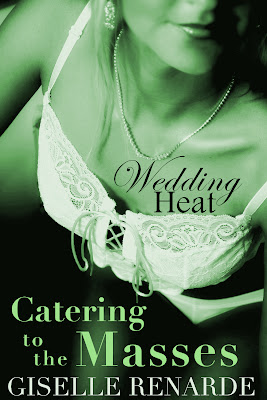 The season begins not with Maggie and Ed, not with family or friends, but with staff at their fancy-shmancy wedding resort!  Two cater-waiters push their friendship to the limit when secrets of how one got hired are revealed.

Our tenth installment of Wedding Heat is not the first to feature a transgender character in a starring role--"If the Shoes Fit" did that in Season One, when Aunt Farrah, a trans woman, was reunited with her lost love.  It's also not the first story to feature gay romance.  "Skinny Dipping" did that, and then "Hole in One" picked it up with an MMM menage.

But Wedding Heat: Catering to the Masses is the first of the series to put gay and trans together with an Aboriginal character who identifies as two-spirit.  I love this guy, Jordan.  He's one of my favourite characters of the entire series.

Catering to the Masses: as a title, it plays on the fact that Taylor and Jordan are cater-waiters, but the "masses" part is kind of a joke in my twisted little mind.  Why?  Because a story about a big two-spirit guy and a scrawny, whiny twink is hardly mass market romance.  It's the kind of niche writing that appeals to queers like me... and maybe you?


Taylor’s never been one to bottle up his emotions. As an out, gay, twenty-three-year-old resort waiter, he’s tired of being told to “take it like a man” every time something upsets him. And Bill upsets him more than anything.

Yeah, sleeping with his married boss is a really bad idea, but Taylor can’t seem to stop. When Bill breaks another date, the only shoulder for Taylor to cry on belongs to his roommate and coworker, an aboriginal trans guy named Jordan.

Level-headed Jordan convinces him to work his shift, even after a blow-out with Bill the Bully, but all bets are off when Taylor reveals a secret his roommate’s not supposed to know.

Will the cater-waiters’ night of rebellion get them fired, or can they take down their big bad boss once and for all?

These days, Jordan was the only real friend Taylor had at the resort. Convenient that they were roommates.

“Aren’t you getting dressed?” Jordan asked when he came out of the bathroom. He always changed in there. Taylor had never seen him naked, not even shirtless.

“No,” Taylor moaned. “Tell Bill I’m dead. Tell him I killed myself. I bet he wouldn’t even care.”

Jordan heaved a sigh. “What did dickface do this time?”

“Okay, but what did he really do?”

Taylor watched Jordan take off his silver rings and put them in the wooden box where he kept things that were special. Bill wouldn’t let them wear jewellery while they were serving guests. Earrings were the only exception, though Bill didn’t like piercings on guys. Taylor had taken out his eyebrow rings at the beginning of the season. The holes had probably closed up by now.

The things we do for goddamn fucking love!

“Remember how he said he was gonna plan something special for next weekend, since we don’t have a wedding booked?” Taylor would have been crying if he hadn’t already drained himself of tears. “Well he told his stupid wife he had the weekend off and she went and booked some family bullshit.”

“So he bailed on you, huh?” Anyone else would say it served Taylor right for fucking a married guy, but Jordan only seemed to see his pain. “I’m sorry, bud. You can come to the capital, if you want. My mom’s driving me and my sister up for the Pride parade. We got a 2-Spirit float this year.”

The thought of celebrating his love of men rather than hiding his love for Bill (not that everybody at the resort didn’t know) certainly appealed to Taylor. He perched on one elbow and looked at Jordan. “You know, you’re the only 2-Spirit person I’ve ever met.”

Posted by Giselle Renarde at 8:08 PM