I've got a thing for Inuit monsters.

And now, something new from the good people at Untreed Reads: Mahaha's Victims.

While you probably know me as an erotica writer, Mahaha's Victims is actually a lesbian horror short.  Yes, there's some sexy content in there, but... hmm, I forgot where I was going with that.  I started thinking about the sexy content. LOL 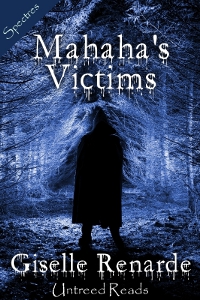 Description:
When crafty Kooloo takes Gyta out in her truck, things get a little too hot and heavy for Gyta's liking. The attention is nice, but she just wants to go home. En route, the truck hits something big. Damned if it isn't a girl! And not just any girl--with her bare feet, sinewy limbs, blue skin, and sharp acrylic fingernails--this willowy slip could only be Mahaha, the mythological Inuit monster.

In the elders' stories, Mahaha's long fingers were able to tickle a person to death. She was a cruel creature, but easily tricked by any clever Inuk. Just lead the monster to the water and push it in. Easy enough.

Kooloo's got a plan to escape the monster's ticklish clutches: push the half-naked creature into the local watering hole. Gyta doesn't know who to feel sorrier for--Mahaha, or the boys at the bar. But can the women execute their brilliant plan before it's too late?
A short story.

“You want a tickle?” Kooloo asked, laughing raucously. Her grin glowed blue in the moonlight. “Mahaha’s victims die with a smile.”

Gyta sucked her teeth, pushing Kooloo’s goddamn fingers away as they snuck up her thigh. “Come on, Koo, don’t be a creeper.”

“Oh, so now I’m a creeper, eh?” Kooloo backed off, leaning her shoulder against the driver’s side window. She shot Gyta a winning smile and, for a moment, the world didn’t seem so tilted. Still, Gyta grasped the truck’s door handle—a subtle threat. She asked herself what it would take, what exactly Kooloo could do, that would cause her to flee.

A nostalgic smiled spread across Kooloo’s lips like hot butter. “Hey, you remember all those stories the old folks used to tell when we were kids?” She seemed to be watching a movie in her mind. “If there’s one thing I missed in the city, it’s being around people who knew our stories—Ijiraat shape-shifters, peaceful Tuniit, Qallupilluk the child-snatcher…”

“That one scared the shit out of me when I was little.” Gyta let her fingers fall from the handle.

Kooloo snapped out of her trance, and that famous smirk plastered itself across her lips. “Nah, the scariest was Mahaha.” Inching closer, she traced her fingernails up and down Gyta’s thigh. “Just think of that wiry blue body with its sinewy limbs. Think of its long fingers and those spiky-ass nails ready to tickle you to death!”

Gyta’s throat was suddenly dry, and she tried to swallow past a lump, but couldn’t. She shrieked when Kooloo tickled her armpits, not because she could feel anything through the bulk of her parka, but because she didn’t know how far down this road she’d allow herself to travel.

“No, Koo.” Gyta tried to put her foot down, but it wasn’t easy. “I already told you, I ain’t no goddamn lezzy.”

“So what are ya, then?” Kooloo was nuzzling behind her ear now, tickling her inner thighs, teasing. “If you’re no damn lezzy, what are ya?”
***
Wanna get tingly?  Check out Mahaha's Victims at Untreed Reads
Hugs,
Giselle
Posted by Giselle Renarde at 9:41 PM