Looking for a Taste of Taboo? Adam and Sheree are Back in Business!

Just call it Flowers in the Attic: The Next Generation.

My "Adam and Sheree" series is some of the filthiest smut out there--so risqué it's been banned by Amazon and many other retailers.

If you don't find hardcore brother/sister sex titillating... well, these crazy kids might not be for you.  But, who knows?  Maybe you'll love to hate them, or hate to love them.  If you've never taken a chance on this kind of stuff, you just might like Adam and Sheree. They were my first, too. 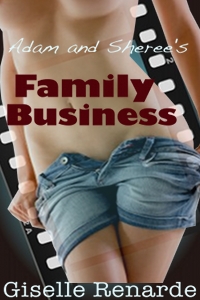 After a summer of forbidden love, Sheree crashes at the townhouse her brother Adam shares with a motley crew of college students.  With no spare rooms, she takes the couch, promising it’s only until she finds a job and a place of her own.

But Sheree doesn’t seem all that interested in working. She lounges around all day, tempting and taunting her brother while she annoys the hell out of Adam’s rent-paying roommates. Adam tries his damnedest to keep his hands off his sister, but he just can’t help himself.  He’ll succumb to temptation, but not in the house. Adam won’t risk his friends finding out about their taboo relationship.


Straddling his thighs, she draped her arms over his shoulders.  Her tits were just a whisper away, and he wanted to feel them pierce his chest.  He wanted her nipples to cut him like knives.

“I’m sorry.”  Adam closed his eyes and breathed deeply.  He could feel her everywhere, like a bolt of silk caressing his skin.  It was just too much.  He swallowed hard as his cock lurched, finding Sheree’s slit and stroking it.  “God, you’re wet.”

She cuddled closer, pressing her big breasts against his sweating skin.  Man, was it hard to breathe in here.  The air wasn’t circulating.  He felt dizzy and hot.  And then Sheree whispered in his ear, “Isn’t it nice to fuck a girl who doesn’t need any foreplay?”

“I’m always ready.”  She trapped his cock between his belly and her cunt, rubbing her engorged clit up and down his shaft.  Her pussy was wet as water and hot as hell.  “Any time, day or night, I’m always ready for a fuck.”

His cock throbbed like it had its own heartbeat.  “What about now?  Are you ready now?”

His thighs tensed.  “Can’t you feel how ready I am?”

“But that’s just your body.”  Reaching down, she grabbed hold of his shaft, arching slightly.  She found her cunt with his cock.  She did all the work, devouring his tip, holding it right there, at the mouth of her pussy.  “You’d better last more than six seconds.  I want to get off.”

Like the first book, Adam and Sheree's Family Vacation WILL NOT be available from Amazon, All Romance, or BookStrand--they don't allow smut this filthy on their sites.

Purchase wherever you prefer, but just a note: I earn higher royalties if you buy directly from the publisher (that's the case with most authors and publishers, so consider buying all your books direct).  Also, Rainbow eBooks is a great corporate citizen and they're really nice people. They've even helped me raise money for an LGBT youth charity on more than one occasion, so if you've never checked them out maybe it's time.

That's all for now!
Happy Reading,
Giselle
Posted by Giselle Renarde at 1:15 PM