Halloween All Over the Map

I'd half-planned to spend the evening on Church Street, because Halloween's always a blast in Toronto's Gay Village, but it's raining and I'm feeling lazy, so here I am at home, writing this blog post.

But this isn't the only blog post I've written today. Oh no.  It's also my turn at Oh Get A Grip! where we're talking about Robertson Davies' High Spirits and whether fiction's more appealing if it's close to home or far, far away: http://ohgetagrip.blogspot.ca/2013/10/close-enough.html

I'm also rehashing an old ghost story you might have heard (it's true--it happened to me) and giving you a chance to win my paranormal erotica anthology BLOOD ADDICT at Long and Short Reviews (remember to include your contact info!): http://www.longandshortreviews.com/guest-blogs/halloween-blogfest-giselle-renarde/


Want to know about this ebook you can win?  Here's the blurb and an excerpt from BLOOD ADDICT:


A jealous God keeps wicked Eve in a cage while a mountain monk guards his chastity with similar restraints. Recovering vampires fall to temptation when they find a cutter who claims to hold the cure. A Gothic mesmerist meets his demons in a repressed patient's nightmares. Twelve men fall to an enchantress’ curse while a sea creature drags an Inuit woman beneath the ice. A husband keeps his thirst for blood secret to protect his wife, and an office romance blossoms between an employee and his succubus boss.


Contains: A Jealous God, Jungfrau, Blood Addict, The Mesmerist and the Mare, Princess of the Ravens, Beneath the Ice, Simple, and Neither Love Nor Money 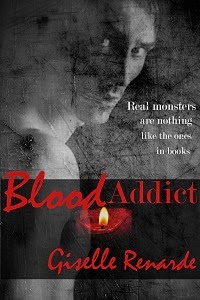 Get your copy of Blood Addict (which includes "Blood Addict" and seven other stories) from:

Email ThisBlogThis!Share to TwitterShare to FacebookShare to Pinterest
Labels: spooky