Speaking of Censorship, it's Adam and Sheree's Family Christmas! 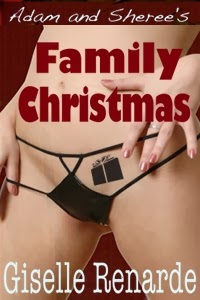 Spend the holidays with the filthiest Adam and Sheree story ever written!


When Adam and Sheree head home for the holidays, it goes without saying that this brother and sister pair won’t be telling their parents they’ve been at it like bunnies.

Adam can’t help feeling betrayed.  He thought he was his sister’s first target of incestuous love, but apparently their uncle got there first.  And Uncle Brian’s not the only family member who’s been in his sister’s bed…

Adam’s eyes rolled back in his head.  He pressed his legs to the back bumper while she teased his prick.  “I don’t want to get caught.”

She clamped down, rubbing his erection inside his pants.  Over the pounding in his ears, he could just make out the sounds of shuffling jeans and skin on skin.  Sheree drove out the cold with her hot tits and her warm breath.  Even her fingers didn’t feel so cool anymore.

“You gonna come for me?” she asked.

Suddenly another hand found his balls, and it was so damn cold he shrieked.

“Shut up, dingus!”  Sheree smacked him in the nuts with her freezing fingers.  “You want Mom and Dad to come looking for us?”

“So come, then.”  Her hand weaseled its way up his throbbing shaft, teasing his tip, making him shake.  “Come in my hand.”

“Yes,” he said in a whisper.  He couldn’t manage much more than that.

She pushed her tits against his back, begging with her body.  He could picture it now: whipping his sister around, bending her into the open trunk, and pushing her down until her boobs met the duffle bag he’d packed.  He wouldn’t be able to wait.  His fingers wouldn’t bother fiddling with her belt, her buttons, her zipper.  He’d tear open the seam of her pants, whip out his cock, and shove it in her wet snatch.

“Holy fuck!”  Adam groaned as the image of entering his sister from behind put him over the top.

He could practically feel the familiar hug of her pussy as her hand closed around his dick.  Her cold palm swaddled his tip as it spewed hot cream.  She shrieked, like it hurt, and maybe it did.  Maybe her skin was cold enough that his heat felt blazing.

“Oh god.”  Leaning into his duffel bag, Adam struggled to hold himself upright.  “Did that really just happen?”

Adam’s groin ached in a strange way.  Though Sheree had relieved his temporary tension, she’d also opened a door that should have remained closed.  Now he wanted more.  So much more.

Where can you buy this hard-to-find book?

Posted by Giselle Renarde at 12:45 AM