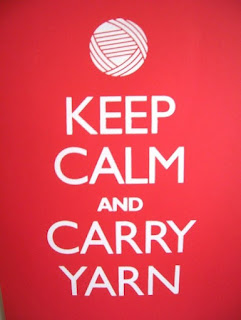 I can't say I was 100% surprised when I got an email from the publisher of my Wedding Heat series telling me Wedding Heat: Pretty Cousin has been blocked by Amazon. 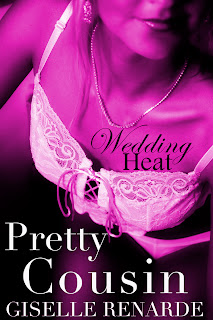 My "Pretty Cousin" has been available from Amazon for... how long now?  Almost two years, I think. The story is about lesbian cousins who are NOT blood-relatives, all of which is expressed in the blurb. A little while ago, Amazon cleansed itself of sex between family members (blood or no blood) and unpublished the book.

At that time, they set the the file to "draft" on the back end, saying the blurb etc. needed to be modified to conform to their terms of service. Of course, they never spell out those terms but, hell, they're Amazon--they don't have to.

So, anyway, how do you take the "cousin" out of Pretty Cousin?  It's right there in the title. The book never made its way back onto Amazon's sales floor and just last week my publisher got word that it's been officially BANNED... BY... AMAZON!  That means they lock down the file on their end so no changes can be made and you can't attempt to re-publish it.  Banned.  Blocked.  The end.

Maybe not so surprising.  We all know Amazon's got a hate on for taboo erotica.

Here's the part that will shock and amaze you: 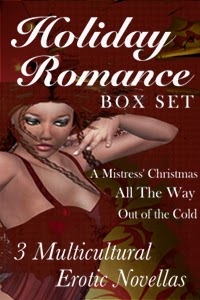 What?  Are you kidding me?  How could it possibly?  There's no taboo content in this collection AT ALL.  There's some menage in the second novella, some adultery in the first--readers might not all like that so much; I know it's contentious--but there's absolutely nothing in the blurb that would indicate a violation of Amazon's terms of service.

I read through the blurb (this blurb) with my eyes peeled for the word that had sent up red flags:

“A Mistress’ Christmas” is a strange, dreamy trip through a young woman’s gift to her lover. She wants to give him everything, but where would he put it? Sometimes the best place to hide a secret is in plain sight.

In “All The Way,” one lucky girl spends Christmas with two sexy guys. When Josie invites her high school boyfriend Kaz to stay with her family over the holidays, there are a few things she doesn't anticipate: Kaz admitting he's still a virgin after all these years? That's a weird surprise. Her husband Rob's attempt to give Kaz a little training in the hot tub? A weird and very sexy surprise. But after the married couple treats him to some of the best nights of his life, who will Kaz fall for?

“Out of the Cold” finds geeky Amira is desperate for fun. When she meets Keith at a first aid course, she sneaks a peek at his registration form to get his email address. After exchanging some very naughty notes, they plan a get-together on New Year's Eve… but the man she meets up with isn’t Keith at all! Will Amira ring in the New Year with her online romance, or will she be left out in the cold?


And then it hit me: VIRGIN.  I've heard a few people mention they'd had issues with Amazon unpublishing books containing "virgin" in the title.  I think it sends up their "barely legal" flags (which is an issue in itself--barely legal is LEGAL ffs!) despite the fact that my guy is in his thirties!

So here's what I did: I revised that blurb, replacing "he's still a virgin..." with "he's still hung up on her after all these years."  I re-submitted it and guess what?  It's back. Easy as that.

What the SERIOUS fuck?  Amazon's tearing evil erotica off their shelves for containing the word "virgin" in the blurb?  I can't even... ugh!


Amazon: http://www.amazon.com/Holiday-Romance-Box-Set-Multicultural-ebook/dp/B00H2NAYUO/ref=sr_1_3?s=digital-text&ie=UTF8&qid=1387783635&sr=1-3&keywords=holiday+romance+box+set
Enjoy it while you can--never know what they'll ban next!
Giselle
-- Giselle Renarde Canada just got hotter!
Posted by Giselle Renarde at 3:57 AM