I'm springing this one on you. Surprise!  It's Mistaken Identity, part of New Dawning's Women's Fantasies line: 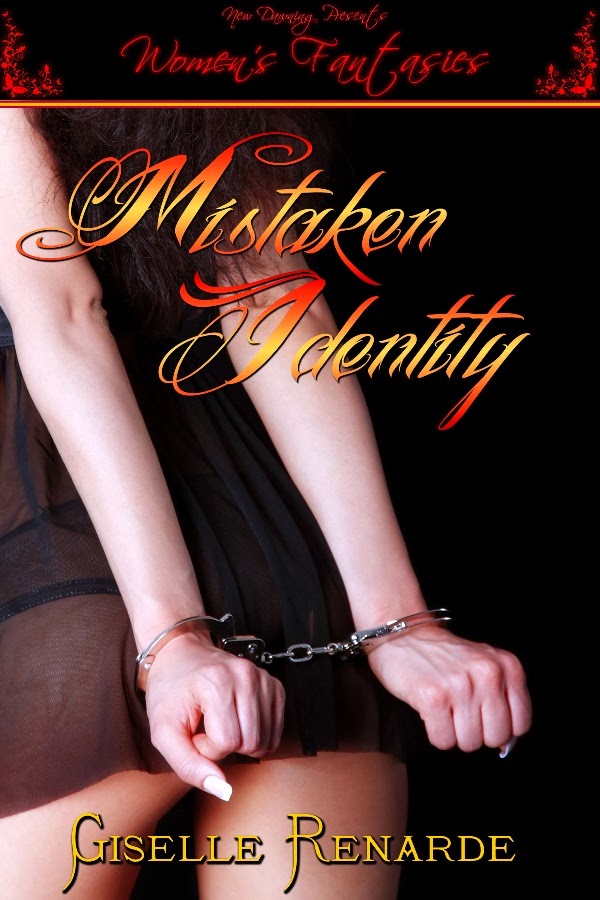 
Excerpt:
“My arms!” Brenda cried, struggling against the strain in her shoulders and upper back. “Who are you? Why are you doing this to me?”

A dark window came down in front of her, and a gush of new car smell hit her in the face. The man from restaurant met her gaze in the mirror as the car squealed out of the alley. “Didn’t my partner introduce herself?”

Brenda’s stomach lurched when they stopped—too fast—for a red light. For some reason, she didn’t want to get the pretty girl in trouble, and said, “Green. She’s Green, she said. She did introduce herself, yes, but I don’t know who you are, or why you… why… why am I here?”

Her body gave in to the onslaught of tears, and she hung her head, letting them fall unhindered into her lap. She could have used a little tenderness, maybe an arm around her shoulders, but Green didn’t budge. All she said, was, “Come on, Mitzi. Get a grip. Enough with the waterworks.”

“Green!” said the man in the driver’s seat. His tone sounded castigating, and that made Brenda feel somewhat vindicated. “Maybe she doesn’t know.”

“Know what?” Brenda howled. “What’s going on? Why do you keep calling me Mitzi?”

“What would you like us to call you?” the driver asked.

“Brenda,” she blubbered. “My name is Brenda.”

Green shook her head. “She’s not co-operating, Red. This one’s gonna be a tough nut to crack.”

“We’re not cracking any nuts, here,” said the driver—Red, apparently—when Brenda howled. “Look what you’re doing to the woman, Green. Lay off for a while.”

“Lay off the wife of a key player in a major crime syndicate?” Green sneered.

“What?” Brenda cried. And suddenly, out of nowhere, she was laughing. “Who, Danny? You think he’s a mob boss? My husband won’t even cross against a light.”

Green let out a growl. “See, Red? Stonewalling us. They’re all the same, these mob bitches.”

It's great. You should buy it.
From Amazon: http://www.amazon.com/Mistaken-Identity-Fantasies-Giselle-Renarde-ebook/dp/B00HS4SGUM/ref=sr_1_2?s=digital-text&ie=UTF8&qid=1389389641&sr=1-2&keywords=new+dawning+bookfair
From All Romance: https://www.allromanceebooks.com/product-mistakenidentity-1386260-354.html
Posted by Giselle Renarde at 3:52 PM