Vampires Look Good On Paper (so do monsters, monks, and maidens)

When my anthology "Blood Addict" came out in October, a lot of readers expressed an interest in buying this collection as a paperback.  Well, it's taken me three months to get things organized, but you'll be happy to know you can finally buy a copy of Blood Addict in print! 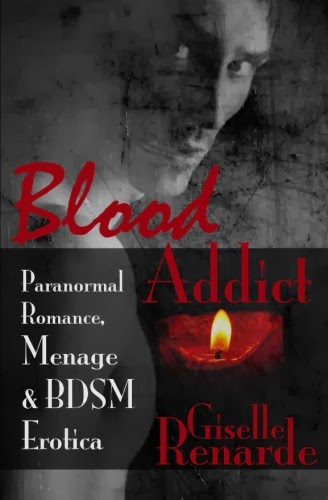 
A jealous God keeps wicked Eve in a cage while a mountain monk guards his chastity with similar restraints. Recovering vampires fall to temptation when they find a cutter who claims to hold the cure. A Gothic mesmerist meets his demons in a repressed patient's nightmares. Twelve men fall to an enchantress’ curse while a sea creature drags an Inuit woman beneath the ice. A husband keeps his thirst for blood secret to protect his wife, and an office romance blossoms between an employee and his succubus boss.

Check out the table of contents, because it's possible you've purchased some of these titles as ebooks:

Did she turn him around or did he do that himself? He couldn’t remember anymore. Somehow he ended up facing her. She tore off his tie with one hand while she found his cock with the other. How did she manage to zero in like that? Just wham! She had it in her fist, stroking hard through the fabric of his trousers.

Max knew Detta wouldn’t be gentle. He’d seen the violence in her, right from the start. She man-handled him, strong, tough, and she stood nearly his height in those fuck-me heels.

She only let go of his cock to bind his wrists behind him—and with his own tie, to boot. When she pressed him against the sideboard, he worried he might ruin one of the catalogue mock-ups, but if she didn’t care why should he? So he pressed his head against the glossy board while Bernadetta tore open his shirt.

Buttons went flying, sailing to the floor in slow motion. Each mother-of-pearl droplet settled like rain on the industrial carpet. He was so mesmerized by the subtle shimmer that he almost didn’t notice Detta ripping his belt from its loops. When she tossed it around her shoulders, it morphed into a black snake. Were his eyes playing tricks on him, or did his belt hiss while his boss opened his fly?


It'll pop up soon at Amazon and I know a lot of readers like to buy there, but I do earn higher royalties if you purchase right from the source. Just saying.  I'll be equally enthralled if you choose to buy my books from any reputable site.

Oh, and the ebook is still available. It was published by eXcessica: http://www.excessica.com/books/index.php?main_page=product_info&cPath=22&products_id=660
and you can get it from lots of ebook stores, like...