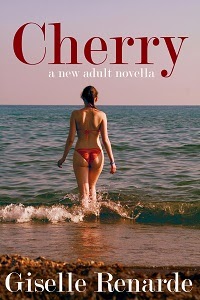 When I saw the theme of this week's My Sexy Saturday, I jumped for joy.  It fits SO WELL with my new release, Cherry. The theme is characters who take command of the situation, and that's Cherry to a T!

Who says the 18-year-old girl has to be the ingenue who's forced to do naughty things by the brutish older man?  That wasn't me at age 18, and it's certainly not Cherry.

When her father invites his recently-divorced friend Phil along on their annual family camping trip, Cherry's not exactly enthused.  She hasn't seen Phil in a while, and she remembers him as a dorky dad.  When he shows up at the campground... WOW, that is NOT the Phil Cherry remembers.  She wants him, and she's going to get him. Oh yes she is...

“Why don’t you sit here on my towel?” Cherry asked. “You can put on sunblock for me.”

Cherry looked out over the water. She’d lost sight of her mother. “You don’t want me to burn, do you?”

He didn’t answer. That’s when she knew she had him in her snare. She felt ridiculously guilty as she handed him the sunblock, because she knew this was wrong, but she kind of didn’t care. And, somehow, feeling bad for tempting Phil made her feel good about herself. It didn’t make any sense, but that’s how she felt.

Phil’s body heat blazed against her back as he knelt behind her. “Do you think you could…?”

She glanced over her shoulder to catch him fumbling with the sunblock. “Do I think I could…?”

He chuckled, red-faced, like he was scared of her or something. “Just lift your ponytail so I can get your back?”
***
Do you think she'll get him? How long can he resist?

And get more sexy at My Sexy Saturday: http://mysexysaturday.blogspot.ca/

Posted by Giselle Renarde at 12:50 AM