Why You Should Read Tangled Roots

When I sat down to create the paperback version of one of my very first ebooks, I was shaking in my boots. I was 100% convinced it would be terrible, the proofread would turn into a massive undertaking, and I’d be at it for a month.

How wrong I was! I breezed through the proofread in a day, taking time out to walk to the supermarket AND read in the park because hydro workers were jackhammering concrete poles outside my building and try working through that, will ya?

I enjoyed Tangled Roots. It felt distant to me, because I wrote it so many years ago, but still familiar because it went through so many rounds of edits in its initial incarnation.

Tangled Roots is a straight romance novella about an Indigenous woman who’s basically racist against her own race. So, yeah, a light and breezy read, there. Simone is not the most likeable character in the world, but that’s kind of why I love her. She was raised by parents who were silent about the past, and her white adoptive grandparents shit all over her cultural heritage. She internalized that hatred and, in doing so, never found a way to love herself.

At the start of the book, Simone has just lost her high-powered business job where she was a high-powered businesswoman. She’s trying to keep it together while her life falls apart, so the first thing she does is kick her live-in toy boy to the curb because kindness is for suckers.

This book is getting more appealing by the second, isn’t it?

But the love story doesn’t begin until Simone retreats to her late parents’ cottage, in hopes of selling it. That’s where she meets Moses, her new Anishinaabe neighbour.

Simone is still rough around the edges. She kind of pounces at him because that’s the way she deals with dudes (she wants control in the relationship), but Moses is super-balanced and he can take a step back and go, “Whoa, there. Let’s get to know each other first.” He’s pretty awesome. 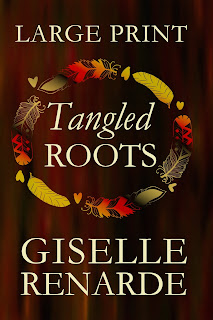 And the weird thing is that before, when I called this book a light and breezy read, I wasn’t completely kidding. It’s high up on the romance scale, for my books. And it takes place in the summer, at a cottage. The way I’ve described it makes it sound a lot darker than it is, I think. This book would make a surprisingly good beach read.

You should read Tangled Roots if you’re looking to diversify your romance portfolio. Both romantic leads are Indigenous and heritage impacts their personalities and their experience of life. I didn’t expect to love it (I know how weird that sounds, considering I wrote it!) because I’m not big on straight romance (or any romance, unless it’s massively fucked up), but Tangled Roots works for me.

If you’re going to buy Tangled Roots, I highly recommend the paperback edition, as it is the most up to date. If you’re looking for the ebook,the first edition was published by eXcessica.

Posted by Giselle Renarde at 11:27 AM