#MySexySaturday Callie and the College Boys 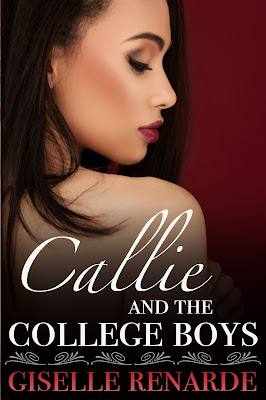 Callie’s cottage has been taken over… by college boys!

All Callie needs is a weekend away from real life. Just two calm days at her haven of relaxation. Is that really too much to ask? Apparently so, because when she gets to her summer home it’s full of young people: friends of her son’s and students at the nearby university.

Is she angry? Not after falling into bed with two young men and a bottle of Kahlua! But can the love of two college boys solve all life’s problems? Or will family issues throw shade on Callie's sunny getaway?

Callie and the College Boys
by Giselle Renarde


Since it's My Sexy Saturday, I'm going to share the first 7 paragraphs of Callie and the College Boys:

Friday night traffic out of the city was killer. The weekend weather report predicted gorgeous temperatures, sunny and unseasonably warm for mid-April. Naturally, every family from Belleville to Burlington decided this was the perfect time to escape into the luxurious wilds of cottage country.

Callie turned up the volume on the radio, but static was taking over already. That was a good sign, she reasoned—if she was out of signal tower range, she was getting closer to the lakeside summer house. Still, she wished this damn car had come with a CD player. It had some sort of iPod connection, but she didn’t own an iPod, despite her son’s insistence she buy one, so that was pretty useless.

Even out here in Frontenac county, traffic was as thick. The evening air choked her with highway exhaust fumes. If only the moral high road was an actual street I could drive on, Callie kept thinking. She was taking the moral high road, wasn’t she? By leaving the house and avoiding the temptation of destroying every precious objet d’art therein?

Yeah, this was the moral high road, all right. She couldn’t be tempted to Hulk Smash the summerhouse. She simply loved it too much. It was a haven for relaxation, always had been. After a nice, quiet weekend by the lake, she was sure to return to the city having gained a great deal of perspective on the current turd pile that was her life.

When she pulled onto the heavily treed lane under cover of darkness, she’d already switched off the car stereo. Over the satisfying crunch of gravel beneath her tires, she heard voices. Her first instinct was “burglars!” until she realized the voices weren’t whispering, but chatting, laughing. The neighbours must be up and throwing a party.

Callie drove up the slim grass path into their lot. When she spotted the cottage, she realized her instinct was only partially correct. The summerhouse was lit up like an Amsterdam storefront, that red-scarf-over-the-lamp effect, and there were other cars in the drive—a mix of ancient station wagons and gleaming little high efficiency vehicles. The drivers and passengers of those vehicles were, she assumed, the people scattered across the deck and milling about her getaway home.

A growl burbled up in her throat like acid reflux, burning as it reached the back of her tongue. “Dante!” she spat as she switched off the ignition.

***
Remember, Callie and the College Boys is ONLY $0.99 THIS WEEK, so now is the time to pick up your copy!