Another Thursday, another Sapphic Signs book to tell you about! This week it's: 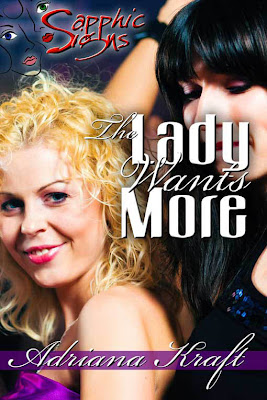 Always a free spirit, Brenda Cassidy is comfortably bisexual and has no plans to settle down. But a fling? The reappearance of svelte, reserved Janet Baxter in Brenda’s life is nothing less than a gift, worthy of every enticement Brenda can conjure up. Can Brenda seduce Janet into an endless night of the lovemaking they enjoyed too briefly as college roommates? What if the lady wants more?

Brenda spun around to face Janet when they got to the far corner of the dance floor. She knew Janet would prefer to be in the corner rather than on the front edge where bar patrons could easily gawk at them. She, herself, preferred center stage but—she grinned at her partner—tonight she’d cater to Janet’s desires. She just wished she could get a better read on her former roommate’s desires. Did they include her, yet? There was no need to rush things now that they’d reconnected after all these years.

Brenda had already decided that Janet needed, once again, to break out of her shell and get on with her life. Of course she’d often been accused of making quick judgments, if not rash ones. But surely the universe hadn’t crossed their paths just so they could share a drink and swap life stories. While she wasn’t looking for a permanent relationship, whatever that was, she was always on the lookout for a relationship that might offer enough challenge and spice to keep her going for more than a night or two.

Brenda grinned at Janet. She knew for certain this tall dark haired women with gorgeous long legs could provide ample challenge and spice for some time. She held out her hands, interlaced her fingers with Janet’s and listened for the beat to the fast paced hip hop music. At arm’s length they swayed and stepped to the music. They circled each other.

Brenda filled her lungs. Her body throbbed with the music. Her brain clicked into hypersensitive mode—once again, she’d become the huntress. “Are you ready for me?”

Janet grinned and nodded. She dropped her hands, spun around and reached for Brenda again.

Smiling, Brenda blew her partner a kiss. She was pretty sure Janet hadn’t heard her words over the band. Yet clearly Janet also delighted in pulsing to the music. Brenda had never seen her more free than on the dance floor—well, and occasionally in her arms. Their lovemaking always began tentatively, with Janet fighting some sort of war in her mind, heart and body. Brenda grinned and squeezed Janet’s fingers. Once unleashed, Janet had never failed to embrace their lovemaking with a zest that astonished Brenda every time. She’d never been with a lover who surprised her as much as Janet.

The third song shifted from fast to slow. Brenda didn’t hesitate. She nestled her body naturally against Janet’s. Her thighs slipped around Janet’s right knee. Janet gasped, and then perhaps not wanting to make a scene, settled her arms around Brenda’s lower back. Avoiding eye contact, Brenda rested her head on Janet’s shoulder, where she appreciated the rise and fall of Janet’s pert breasts. As usual, Janet’s chin came to rest atop Brenda’s head. They swayed together as if they formed an island on the otherwise crowded dance floor.

Brenda wished she knew what Janet was thinking, if she allowed herself to think at all. Gradually, Brenda’s hands slid down over Janet’s tiny rump. She felt Janet’s thong through the skirt fabric. She was surprised to discover her former lover had chosen such a risqué undergarment. Brenda closed her eyes and nestled closer as Janet’s hands moved to rest on her rump. Although they never traveled lower, Brenda was thrilled to think Janet wasn’t totally uninterested. She wet her lips and peeked again at the rise of Janet’s breasts. She blew warm breath across Janet’s cleavage knowing full well her nipples would harden in response, if they hadn’t already.

Posted by Giselle Renarde at 8:20 PM