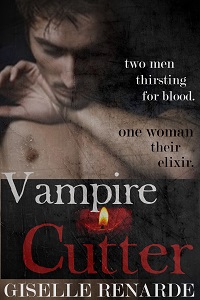 This week's My Sexy Saturday topic is Our Sexy Halloween. In celebration, I've released a new ebook at the introductory price of only $0.99!

Vampire Cutter is actually NOT a story about someone who slashes vampires. That would be kind of awesome, though.

The anthology sadly under-performed (especially for a book full of red-hot paranormal stories), so most readers have never been exposed to this tale. I couldn't publish the story as Blood Addict after publishing an anthology as Blood Addict, so, to prevent confusion, I've renamed it Vampire Cutter for the ebook version.

That's not confusing at all, is it? Only took three paragraphs to explain. heh

Anyhoo, since it's My Sexy Saturday, I share with you the first 7 paragraphs from Vampire Cutter:

That’s what people didn’t seem to realize. If you wanted to give up blood and you had a hell of a lot of willpower, you could do it. It wasn’t easy. Hell, it was probably the hardest thing Byron had ever done, but it was possible.

Vampire stories were so romanticized. All the undead stuff, the melodrama of addiction, the eroticism, the homoeroticism? That wasn’t life, for Byron, even if he was gay. Well, bi, actually.

His boyfriend Tyler was always on him about bisexual invisibility and how they shouldn’t let people think they were gay just because they were two guys who loved each other. Byron didn’t care so much what people thought, but for Tyler’s sake he corrected their mistakes.

Well, okay, maybe part of the reason he let people assume he was gay was that it helped in his profession. If you’re styling a woman’s hair and she’s sitting there thinking you’re gay, she’ll open up to you like crazy. It makes the job easier. Tell her you’re bi and suddenly she’s wondering why you mentioned it at all. Are you hitting on her? What’s your deal? So, often, Byron let sleeping dogs lie. No skin off his ass.


I've got a few buy links for you--only a few because I left this to the last minute to upload. Oh, and the American Amazon page is messed up as I'm posting this. On my end it says Vampire Cutter is available for sale, but the site says it's not. So you'll have to give the link a click and hope for the best!

Oh, and if you're reading this post on Halloween, you can still get A Taboo Trick or Two FREE right here: http://www.amazon.com/gp/product/B016XFMTJK