"If you can't laugh at yourself...": Guest Post from Oleander Plume

Someone asked me if I get turned on reading my own stories, and the answer is no, not really. Not sure why that is, but I suspect it’s because I am too wrapped up in getting the details right, or criticizing every detail to get hot and bothered.

Oddly enough, I do laugh at my work. Often. Certain lines or scenes strike me as funny and crack me up every time I read them. I’ve collected a few of my favorites to share with you today: 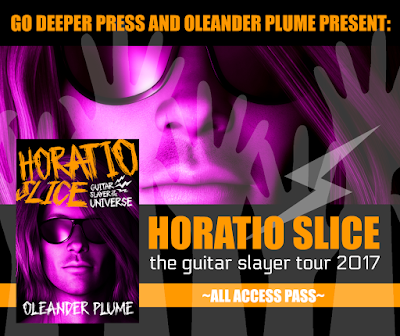 Horatio stood next to Gunner and peered out. “They are aiming cannons at us, Snake. Fucking cannons!”

“Prepare for lift off.” Seven took over the controls, and the ship began to spin. “Eat our wake, fuckers!”

“Holy shit!” Horatio shrieked. Huge waves headed toward the oncoming ships. “We’re creating our own hurricane!” The ship spun even faster. Horatio grabbed Gunner and held him tight so that he wouldn’t get knocked over.

“If I had the ability to puke, I would be puking right now,” Snake wailed.

“Yeah, ride me, you suave little bastard!” Gunner said. “Hope they can get semen stains out of Armani, baby, ‘cause I’m going to make you come twice.”

Gunner waited until Saul was out of sight and mouthed, “He’s a freaking squirrel?” to Horatio and Snake.

“What’s a squirrel?” Snake whispered back.

Horatio stuck his thumb up in air. “The bow tie, though? Pretty cute.”

“According to this, we need a ship hierarchy. Let’s see, you’re captain.” Seven used air quotes around the word captain, which made Snake bristle. “Sugar is second in command, so who’s in the third spot?”

“You are, darling,” Snake said.

“I am? Is it because of my sick techno skills or my pretty, pretty balls?” Seven batted his lashes so hard he nearly toppled out of his chair.

Gunner was afraid the contraption would eat his brain, but he stuffed it on his head anyway. The thing was too big, hanging low enough to cover his eyes.

Gunner pushed up the helmet and glared at him.

Princess Petal said, “Now, look at Horatio and concentrate only on Horatio.” While Gunner stared into his piercing blue eyes, Horatio’s voice echoed inside his head: Gunner is so fucking hot. I want to put my tongue up his sweet little ass right now. I wonder if he’d let me cover him in whipped cream, ‘cause licking it off would be fun.

Horatio jabbed Snake in the chest. “You tipped him a thousand bucks for being a surly little fleabag?”

“I tipped him so he’d forget we were ever here,” Snake said. “A good pirate is an invisible pirate. And just so you know, it costs extra to get people to forget you.”

You can read more screwball comedy, plus some adventure, and maybe more than a little hot man on man sex in Horatio Slice: Guitar Slayer of the Universe.

Horatio Slice is NOT dead.

Gunner Wilkes knows a secret. Heartthrob rock star Horatio Slice is not dead. Sure, Gunner may turn heads with his big brain, good looks, and gym-built body, but his mind is on one thing only: returning his all-time favorite rocker and secret fanboy crush to Earth.

Yes, there are VAMPIRE PIRATES

Fame and stardom were starting to wear thin for Horatio Slice, but when he was sucked through a magical portal while on stage at Madison Square Garden into a jail cell in a strange dimension called Merona, his confusion quickly cleared upon meeting his sexy, dark-haired cellmate, a vampire pirate named Snake Vinter, who filled Horatio in about life in the universe, jumping from dimension to dimension, and craftily avoiding the wrath of gnarly-mask-wearing leather queen King Meridian—a guy nobody wants to cross.

The metal ship is named Frances.

And on Snake’s metal ship live eight identical blond Humerians, who proudly display their cocks and assholes in carefully crafted trousers, as well as a wild assortment of untamable, cock-hungry travelers and stowaways. But someone has hacked into Frances’ mainframe, demanding that Snake and crew deliver Horatio Slice to King Meridian, or feel his wrath.