How to Fail Miserably at Love 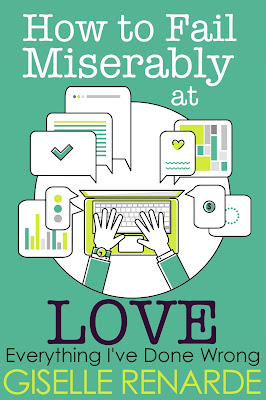 I fail a lot. Last night I had donuts for dinner--but that was Sweet's idea, so maybe that's less a fail and more the universe telling me I fell in love with the right person.

But I've failed in other ways, too.

How to Fail Miserably at Love was released a week ago and it's taken me until now to tell you about it. That's a fail.

And when I was collecting links just now, I realized there's a typo in the section of the book blurb that appears across this series. Same typo in 5 book blurbs. That's a big fail. But failier still is the fact that I saw that typo and my first through was... yeah, I'm way too lazy to go back and fix that.

The only thing potentially un-faily about my message to you is that How to Fail Miserably at Love is currently FREE, so you can run out and buy it without spending any money. Wa-hey!

Don’t let your love life get you down. We can all fail at relationships together!

In this scandalous assortment of anecdotes from the writers’ blog Oh Get a Grip, Giselle confesses her many sins in the relationship department. From being an inconsiderate partner to throwing up at a fancy hotel during an anniversary getaway to flat-out adultery, Giselle’s been bad in more ways than one.

Get it while it's free!
Amazon https://www.amazon.com/Fail-Miserably-Love-Everything-Wrong-ebook/dp/B076Y59KDK
Google Play https://play.google.com/store/books/details/Giselle_Renarde_How_to_Fail_Miserably_at_Love?id=xrY7DwAAQBAJ
Kobo: https://www.kobo.com/ca/en/ebook/how-to-fail-miserably-at-love
Posted by Giselle Renarde at 4:24 PM

Email ThisBlogThis!Share to TwitterShare to FacebookShare to Pinterest
Labels: FREE READ, How to Fail Miserably at Everything