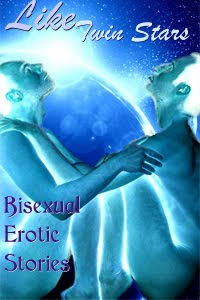 Damn it Jim, we missed it again!

Apparently every September 23rd is hailed as Celebrate Bisexuality Day, so I'm late with the well-wishes here. Sorry. Better late than never...? If I can make my excuses, I didn't actually know it existed.

But it's true that bisexuality ought to be celebrated. It tends to get skimmed over, largely. In many context, bi folks are even castigated or mocked--and I'm talking by both the breeders and by the so-called LGBT community. I've (honestly) heard some lesbian and gay folks say things to bi friends like, "Oh, soon you'll realized you're actually a lesbian. You're not really bi."

Let's think about the kind of labels we stick to bi folks. We all have stereotypes implanted in our minds. Have you ever said anything about a bi person or bisexuals as a group that wasn't so savoury?

"He's so wishy-washy. Is he straight or is he gay?"

"When is she going to come out for real?"

"He must just be oversexed. He'll jump anything with a heartbeat."

"It's just a phase. When she's finished experimenting, she'll settle down with a nice guy."

Bi folks might even be up against more obstacles than gays and lesbians. Is that a really contentious statement to make? I suppose so, but bisexuals get a hell of a lot of flack from just about everyone. That, or they're just ignored as a group.

For the next two weeks the title is on sale at up to 20% off from most partner sites, and right here at Circlet.com, so don’t dawdle, download a copy today!

My story is called The Travesties, and I'd like to tell you a bit about it:

After hormonal pollution of major waterways goes unchecked for decades, a genome variance generates a new breed of humans. The Travesties, as sensationalist media and medical professionals dub them, experience gender as fluid, not only mentally and emotionally but also physically. Their bodies are capable of changing form at will, from masculine to feminine and back again. In a world that accepts only the black and white states of male and female, the Travesties are feared as a dangerous new race.

Compassionate clinician Sebastian Savant is distressed by the unapologetic denigration the Travesties face. When he meets Cam/ille, a Travesty patient at his hospital, he soon discovers her attending physician isn’t as sympathetic as she appears. Can Sebastian help Cam/ille escape a scientific community that sees her unique body as a hazard to society?

If I'm honest, I'll admit The Travesties is the first story I've ever written that my Sweet actually jumped out of her seat over. She's a S/F nut, so I'm glad my initial venture into the sci fi realm pleased her so.

So, get yourself a copy of Like Twin Stars new from Circlet Press and have yourself a happy belated Bisexuality Day!