Big News About My Big Box...set of Wedding Heat Titles!

This is the moment you've all been waiting for!  Actually, you probably haven't been waiting for it, since I never gave you any indication it was about to happen.  But it has happened.  It's here: 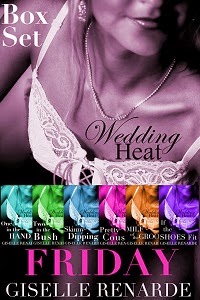 That's right, folks.  Now you can get the first SIX Wedding Heat stories in one exciting collection.  And, for a limited time only (we're talking until the end of October), you can get 6 books for the price of 1!

Did you hear that right?  Elephant Morpheus Seismic Journey?  No, no, no... I said right now you can get SIX Wedding Heat titles for the price of ONE!

To get "Wedding Heat: Friday (Box Set)" just hop on over to All Romance, where the box set is on sale: https://www.allromanceebooks.com/product-weddingheatfridayboxset-1319621-341.html

This box set of Wedding Heat novelettes contains all six books from the series’ first season.

In “One in the Hand” a married couple develops a love of outdoor sex en route to their niece’s wedding. In “Two in the Bush” a curvy girl and her coworker crush come together with the help of a beautiful stranger.

“Skinny Dipping” follows Joey as he strips down and swims with the boys, only to lose his virginity to Greg. Next up, Vanessa finds out a secret about Maggie that might just land them both in hot water.

This wedding’s already got serious sizzle, and it’s only Friday night! 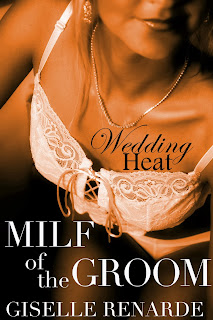 Excerpt:
Even in the low light of the library, Ellora could see the scarlet blush rising up Russ’s neck, ascending all the way to his forehead.

“You’re a very attractive lady,” he said. “Very attractive. I wouldn’t be lying if I said you were the most beautiful woman here. I think your family’s jealous of more than just your money, Mrs. Milton.”

“Ellora,” she insisted, gazing up at him, finding at once softness and sheer lust in his eyes.

“Ellora,” he said, his breath rumbling like a grizzly’s growl.

The heat between them might have singed the eyebrows off a weaker woman, but Ellora wore their shared lust like a jewel. “You’ve been so kind,” she said.

She didn’t give him time to finish, launching herself at his lips, kissing him hard while his fingers felt their way up her side. Her dress was a flimsy thing, though heavy with shimmering beads, and his fingertips soon met bare skin, searing it like a hot pan.
Russ broke away.

“Maybe we shouldn’t,” he whimpered like a loyal mutt.

But Ellora was already reaching around, unfastening her bra before letting the strap of her dress slip down her shoulder, slide down her arm. “Oh Russ, darling, I rather think we should.”

His hot gaze followed a trail of naked skin left in the wake of her tumbling dress. When her breasts were bare, he stared at them, transfixed, and that wolfish lust in his eyes gave her cause to grin zealously. She took hold of his big hand and moved it to her breast, pressing it, making him squeeze.

The heat of his skin against her sensitive nipple ramped up Ellora’s wild desire. She moaned softly, and he responded in kind, sliding down the couch and landing on the floor in front of her. Like a desperate beast, Russ pulled her into his grip and sucked her nipple so hard she hissed at the sensation.

“Careful, careful,” she warned, pressing on his forehead, shifting him to the other breast. “Too much too soon, sweety.”

He looked up at her with worry in his dark eyes. “I’m sorry, Mrs. Milton. Did I hurt you?”

She smiled, trying not to laugh. “Will you please call me Ellora?”
***
Buy Now from All Romance, where the box set is on sale: https://www.allromanceebooks.com/product-weddingheatfridayboxset-1319621-341.html

Coming Soon(ish) to other retailers!
Posted by Giselle Renarde at 2:05 PM