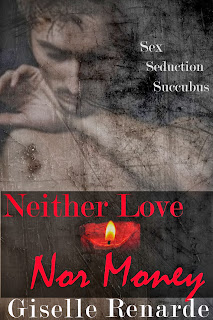 Detta's employees like to spread vicious rumors about their boss sleeping her way to the top.  They don't know how right they are, and neither does the Detta's new pet, Max, until she seduces him while they're working late.  She ties him up to show him just how much power a succubus can wield over a man, but there's a hitch: Detta falls for Max, so hard she can't conceive of stealing his essence.  Without the energy she needs, Detta fades fast.  Will Max do what's necessary to make her well again?

Did she turn him around or did he do that himself?  He couldn’t remember anymore.  Somehow he ended up facing her.  She tore off his tie with one hand while she found his cock with the other.  How did she manage to zero in like that?  Just wham! She had it in her fist, stroking hard through the fabric of his trousers.

Max knew Detta wouldn’t be gentle.  He’d seen the violence in her, right from the start.  She man-handled him, strong, tough, and she stood nearly his height in those fuck-me heels.

She only let go of his cock to bind his wrists behind him—and with his own tie, to boot.  When she pressed him against the sideboard, he worried he might ruin one of the catalogue mock-ups, but if she didn’t care why should he?  So he pressed his head against the glossy board while Bernadetta tore open his shirt.

Buttons went flying, sailing to the floor in slow motion.  Each mother-of-pearl droplet settled like rain on the industrial carpet.  He was so mesmerized by the subtle shimmer that he almost didn’t notice Detta ripping his belt from its loops.  When she tossed it around her shoulders, it morphed into a black snake.  Were his eyes playing tricks on him, or did his belt hiss while his boss opened his fly?

Grab your copy from:

Coming soon to other retailers!
Posted by Giselle Renarde at 9:15 PM