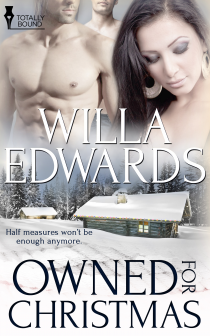 Owned for Christmas
by Willa Edwards

Although she had no idea that Grant and Daniel were brothers, Grant revives all those needs that Daniel can’t fulfill. But she won’t give up the man who helped mend her broken heart after Grant shattered it—even if she has to bury the submissive part of herself to do it.

A year ago, Grant Farrell left the woman he loved—and the best sub he’s ever controlled—to tend the family ranch after his father’s death. It almost tore his heart out to leave Kate but he had no other choice. But he doesn’t realize how much it hurt them both until she shows up at his family’s home on his brother’s arm.

Buy Now from http://www.amazon.com/Willa-Edwards/e/B005ERNN0I/ref=dondes-20
or https://www.totallybound.com/owned-for-christmas
Posted by Giselle Renarde at 3:30 PM