Here's some taboo smut to look forward to... 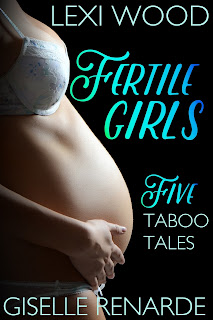 Who else spends their Saturday nights subjecting their genitals to the carcinogenic crush of a laptop?

But I figured I might as well tell you about the upcoming release Lexi roped me into. Fertile Girls will hit the market next Friday (that would be the 28th, I do believe) and it's just so smutty. So, so smutty.

It's all breeding erotica, which isn't really what I do, so I only had Sharing the Stranger to contribute. That wasn't good enough for our little Lexi, of course. She chained me to the computer and forced me to write a brand new piece.

So I wrote this really messed up thing about a girl in a commune (cult?) who's preparing to take her turn as wife of the leader. Every young woman spends one year max as this guy's wife. If she doesn't give him a child in that time, she's out on her ass. Oh, and she needs to be a virgin because when this dude plants his seed in a virgin, that child become a GOD.

Like I said: it's messed up. But that's kinda my thing. 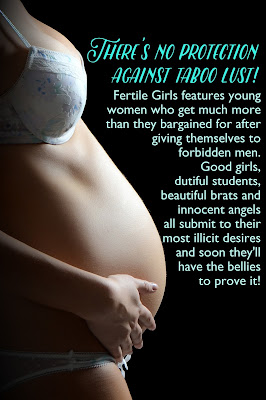 Lexi would tell you her stories are better than mine, but she's like that. I must admit, I have a particular affection for Good Girl's Fertile First Time, which appears in this collection. It's got a porny title, but it's about a man whose daughter died at age 8 and he never recovers from that trauma. After a while, his wife moves on (and out and gets remarried and all that) and this guy's left alone with a bottle.

Every year, he throws a birthday party for his daughter and for a while her school friends come, but by the time she would have been 18, they've moved on too.

The thing Jack doesn't understand is that she didn't come to this party to honour her late friend. She's there for Jack. She's the one person who cares whether he lives or dies--and she wants him to live fully. She can't bring his daughter back, but she can give him a new family. Children. And a wife who adores him. She can give him all that.

Good Girl's Fertile First Time is really... emotional? Is that the right word? Because, don't get me wrong--it's absolute smut. But there's something in there. Something deep. And as much as I hate to compliment Lexi, it's well done.

Anyhoo, now that I've tempted you with all the racy details, you have to wait almost a week for Fertile Girls to come out. It'll be published by eXcessica.

If you want a reminder email when Fertile Girls is released, you can sign up for my newsletter: http://eepurl.com/R4b11
or Lexi's (she'd tell you hers is better): https://app.mailerlite.com/webforms/landing/e8r7l6

UPDATE: The paperback is now available from Amazon! http://www.amazon.com/Fertile-Girls-Five-Taboo-Tales/dp/151701803X/ref=dondes-20
Posted by Giselle Renarde at 11:50 PM