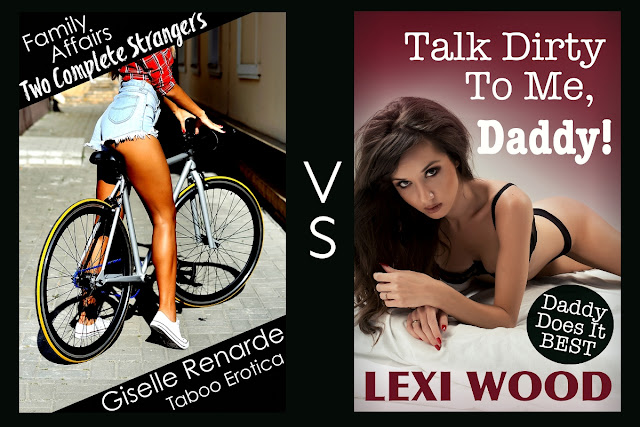 A couple weeks ago, Lexi Wood challenged me to a duel. If you don't know Lexi, she's the smut-writing sock puppet that lives in my apartment. She's pretty damn cocky, too. Apparently she thinks she's the superior smut-slinger.

We'll see about that!

She thinks that because she spends her whole life writing stepdaddy smut, she writes taboo erotica better. I guess she wasn't around in 2013, when I wrote my 100,000-word Adam and Sheree trilogy. No steps in that (unless you're reading the Amazon version, Adam and Sheree's Stepbrother Series). Just pure, unadulterated family sex.

So Lexi upped the stakes.

She challenged me to a family sex writing competition. No pseudo stuff. No steps.

I'm not generally a competitive person, but Lexi gets me all riled up. So IT'S ON! Round One has begun!

Who can produce the dirtiest taboo tales? It's the Lexi vs. Giselle Smut Smackdown! We write 'em, you rate 'em.

Our first challengers are Lexi's Talk Dirty To Me, Daddy! and my book, Two Complete Strangers: 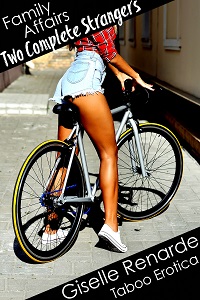 I know what you’re thinking: I had an affair with my father, so I must be cracked. But this man didn’t raise me. We were two complete strangers when we met at that seaside pub. There was an instant spark between us. He couldn’t resist his little girl, and I didn’t even try to resist him. Maybe it was sick and wrong and totally messed up… or maybe we’re meant for each other.

Buy it here: https://www.smashwords.com/books/view/618644?ref=GiselleRenardeErotica
Use Coupon Code KF54P to get Two Complete Strangers for only $0.99!
Coupon Expires: April 30, 2016


And here's the challenger: 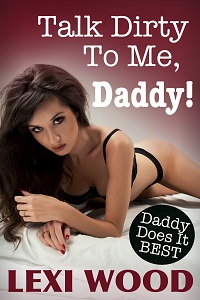 Marissa makes a living out of talking dirty. Phone sex is her secret job. She does it late at night, after her father’s gone to bed. When one special caller gets her hot and bothered, she sneaks into Daddy’s bedroom to steal some late night loving. But wait… where’s Daddy? He’s not in bed. Where could he be? And how did Marissa’s caller manage to tap all her taboo desires?

Read both books and vote for your favourite:


Lexi vs. Giselle: Smut Smackdown! Who wins Round One?


If the above widget isn't working right, you can click here: http://goo.gl/XypKzW
Posted by Giselle Renarde at 8:53 PM